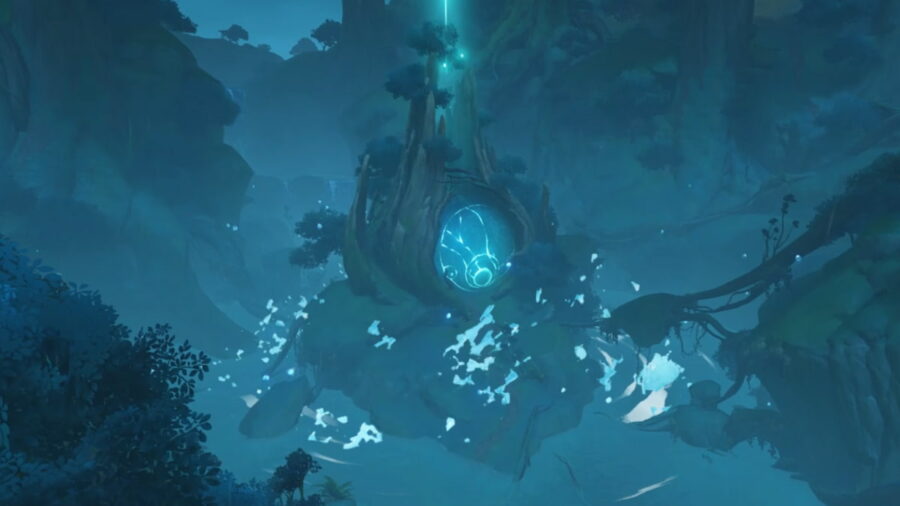 Varuna Gatha is a Sumeru World Quest under a questline of the same name. It sets the stage for the journey toward healing the Varuna Contraption—a giant hollow tree deep within the Apam Woods. It has the power to turn black rain into good rain, but it has since become sick with broken branches and bugs gnawing at its roots.

To unlock this World Quest, you first need to complete the first quest in the Aranyaka: Part II - Dream Nursery questline called The World of Aranara. This will unlock Vanarana in the northwestern part of Sumeru’s rainforest area and will allow you to switch between the real and dream Vanarana.

Once that’s done, head to the area circled in the image below to find an Aranara being attacked by fungi.

Defeat the fungi attacking the Aranara to prompt a dialogue with it. Once that’s done, head to the Teleport Waypoint northeast of Apam Woods, which is the location of the vantage spot you agree to meet up in. Apply Dendro onto the Clusterleaf of Cultivation to spawn Four-Leaf Sigils, then use the Sigils to traverse to the next location.

Defeat the Fungi on the platform. Then apply Dendro to the Clusterleaf of Cultivation on the same platform to force it to regurgitate Four-Leaf Sigils, which you should use to head to the next location. Defeat the fungi in the area as well. Once that’s done, follow the quest marker to a cave with a leaf rotation puzzle.

Simply interact with the leaf statues (circled in the image above) to rotate them until their sharp points are facing the statue in the middle of the clearing. After, speak with Arapandu to complete the World Quest. You’ll  also unlock the next three quests in the Varuna Gatha World Questline, which can be done in any order:

Check out our guide on Genshin Impact Cooking, A Pleasant Memory World Quest guide – An Unwavering Culinary Dream to help another little Aranara.