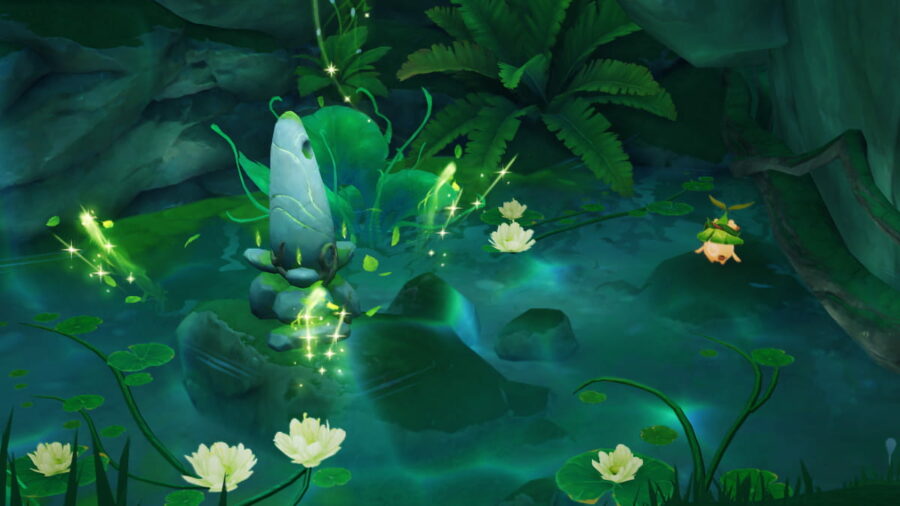 The Memory of Stone is a World Quest in the Varuna Gatha questline. It involves helping a scared little Aranara named Aranakula in the Yasna Monument.

To unlock this World Quest, you must complete the Varuna Gatha World Quest, the first in the quest line. Once that's done, you'll unlock three new quests at the same time, and they can be done in any order:

This guide will walk you through how to complete Memory of Stone.

Related: Where to get Rukkhashava Mushrooms in Genshin Impact

Follow the quest marker to the Yasna Monument, where you must find the Aranara named Aranakula, hiding behind a fallen tree trunk. After speaking to Aranakula, you need to accompany him toward various checkpoints in the area without being caught by enemy fungi.

Move forward without being noticed

Refer to the quest marker on the mini-map to find your destination. When you get close enough to the enemy's line of sight, their target range will appear as a red circle on the ground. All you need to do is avoid the red circles not to get caught. If you get caught, Aranakula will run away to a safe space, and you need to pick him up and try again.

Once Aranakula is satisfied, he'll ask you to head to the giant stone atop a hill, which you can find by following the quest marker. Then interact with it to Clear the spores. After that, you need to find a branch similar to the one in Varuna Gatha.

Find the "branch" together with Aranakula

Head to the southwest edge of the quest area (circled in the image above) to find a tiny cave with a Four-Leaf Sigil floating beside it. Enter the cave to find a clearing with the magical branch that Aranakula's been looking for. After the dialogue with him, he'll ask you to make the leaves turn toward the branch.

Make the "leaves" turn toward the "branch"

If you missed or lost the Seelie, reference the blue arrows (not quest markers) in the image above for the locations of all three leaf statues. After you've rotated all of them, the game will prompt you to return to the cave where Aranakula is waiting. After some dialogue, you'll be teleported to the rest stop in Apam Woods, ending the World Quest.

Check out our guide on How to find the hidden song in the Genshin Impact The Rhythm that Leads to a Gloomy Path World Quest to complete another quest under Aranyaka: Part II.