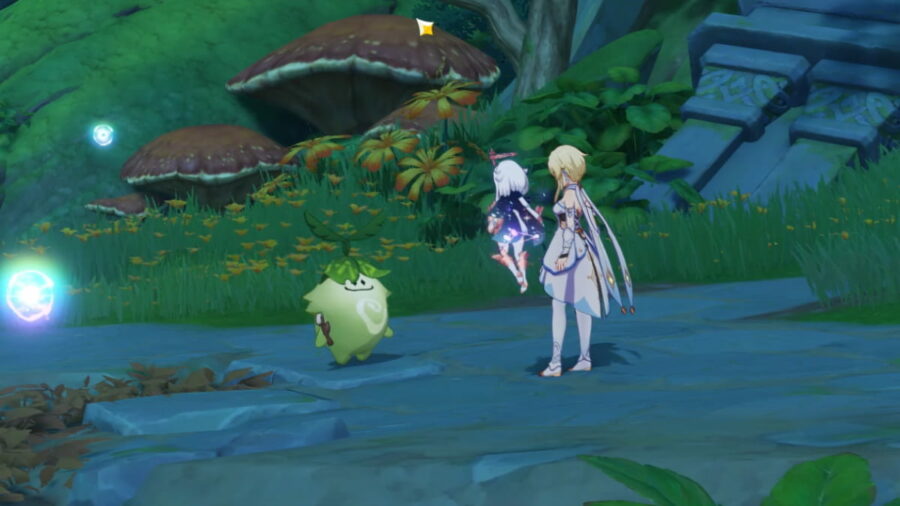 The Irate Iron Chunk is a World Quest under the Varuna Gatha World Questline. In this segment, you must help a brave Aranara named Arabalika to get rid of Ruin Guards in the Ruins of Dahri and activate the branch hidden underground.

To unlock this World Quest, you must complete the Varuna Gatha World Quest, the first in the quest line. Once that's done, you'll unlock three new quests at the same time, and they can be done in any order:

This guide will walk you through how to complete Irate Iron Chunk.

Related: How to find the hidden song in the Genshin Impact The Rhythm that Leads to a Gloomy Path World Quest

Before starting, prepare a battle-ready team—preferably one strong enough to defeat Ruin Graders, as you need to defeat them later. Once you're ready, follow the quest marker to the entrance of the Ruins of Dahri, where you'll find Arabalika facing off against a Ruin Guard. Once that's done, he'll test your abilities by asking you to battle against three Ruin Guards across three checkpoints. Use the quest marker to find and defeat all of them.

Find the mechanism and, activate it & find the "branch" with Arabilaka

After defeating the third Ruin Guard, you'll be asked to find a mechanism and activate it. It's located on the same platform, so just turn to the corner and interact with the mechanism to drain the water in the pool. This will open up an entrance leading underground.

Glide down to the bottom of the opening to find a clearing with inactive Ruin Guards and the branch statue at the center. Approach it to proceed with the quest.

Make the three "leaves" turn towards the "branch"

The green traces will lead you to the location of the three leaf statues in the area. Simply interact with rotating each of the leaf statues until the sharp point is facing the branch statue in the center. Once all three have been correctly rotated, two Ruin Graders will appear. Defeat them to prompt dialogue and complete the World Quest.

Check out our guide on How to get rid of Withering in the Genshin Impact The Rhythm that Leads to a Gloomy Path World Quest to complete another quest in Aranyaka: Part II.