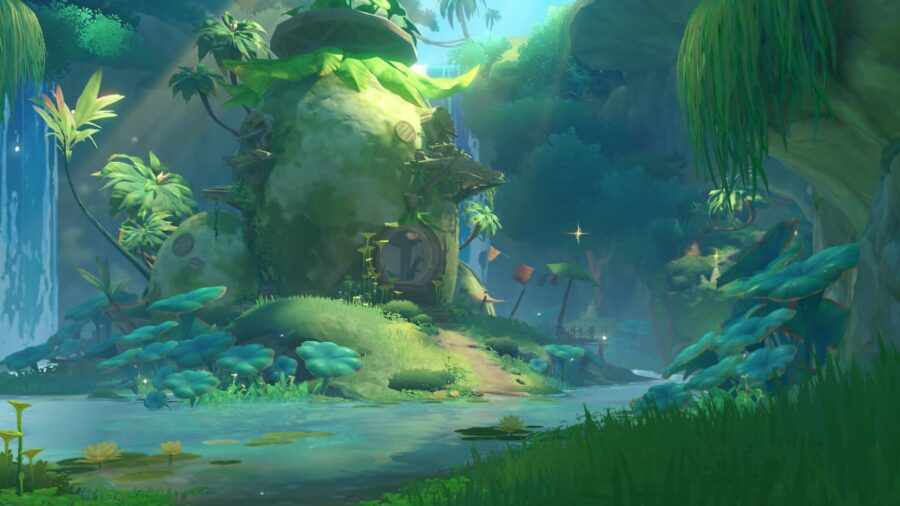 Aranyaka: Part II - Dream Nursey is a multi-part questline that starts with The World of Aranara. In this World Quest, you and Paimon meet Sumeru’s little woodland fairies and befriend them in hopes of obtaining the Bija to save Rana.

To unlock this World Questline, you first need to complete all three parts of Aranyaka: Part I - Woodland Encounter. It involves three World Quests:

The last quest ends with an Aranara informing you that you must find a way to obtain the Bija from Vanarana, prompting Aranyaka: Part II - Dream Nursey to begin.

The World of Aranara starts with a prompt to head to Vimara Village to find an old man named Amadhiah. Follow the quest marker to find him by the river, then speak with him to get a Gadget called the Vintage Lyre. Once that's done, follow the quest marker (or the green traces) toward glowing spots, which will keep on moving as you progress along with Paimon's dialogue.

You'll eventually reach the northern part of the map, west of Chatrakam Cave, where you can activate a hidden Teleport Waypoint. Keep following the green traces until you find a strange arch with music notes spilling in-between.

Related: How to use Four-Leaf Sigils to explore Sumeru in Genshin Impact

Equip the Vintage Lyre and activate it to play Arana's song, the Rhythm of the Great Dream. On the first line of the music score, play the following notes in this exact order: fa > mi > so > fa > do. This will activate the Phantasmal Gate. Before starting the Challenge, bring out a battle-ready team—preferably with a character who can apply Electro without cooldown (such as Lisa and Yae Miko).

Follow the green traces until you reach a strange stone with a swirl pattern. Activate the Vintage Lyre and play the same tune using the first line: fa > mi > so > fa > do. You’ll meet an Aranara named Arama, who will ask you to help other Aranara friends. After exiting the house, make sure to interact with the nearby Statue of the Seven to light up Vanarana and make it easier to explore the area.

Once that’s done, follow Arama and help them defeat the Vanagni (Pyro Whopperflowers). After that, follow the quest marker back to the stone and play the same tune with the Vintage Lyre to be teleported to the dream Vanarana, where all the little Aranara friends live.

Follow the quest marker and enter the house where Araja lives. Interact with him to complete the World Quest. You’ll obtain the Quest Items called Aranyaka and An Ode to Soul-Light. The next World Quest called Children of the Forest will also automatically begin.

Check out our guide on How to unlock & switch between real & dream Vanarana in Sumeru in Genshin Impact to learn how to toggle between Vanarana's two forms.