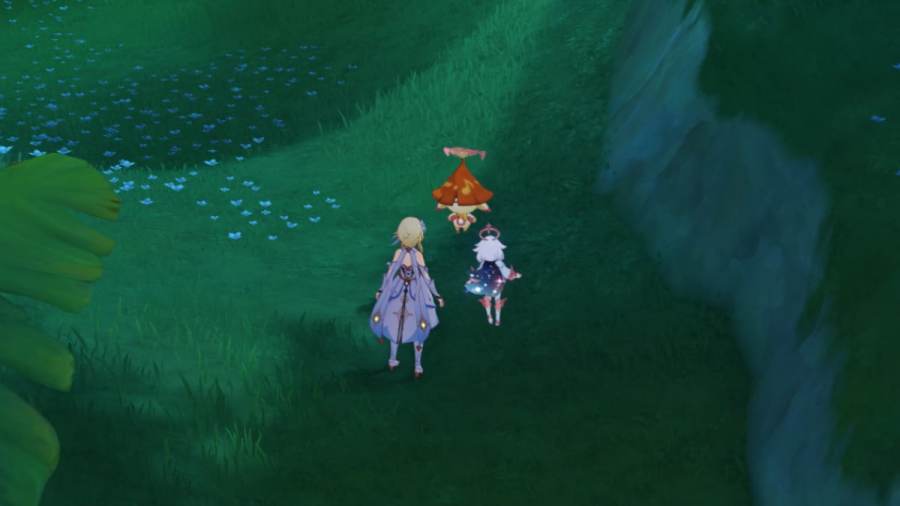 The Starry Night Chapter is the first World Quest under the Agnihotra Sutra questline, which involves finding the Zorah Mushroom—a legendary plant that can save Sumeru's rainforests. You'll meet an Aranara named Aranakin, who will be accompanying you to find the Zorah Mushroom before the Eremites could get their hands on it.

To unlock this World Quest, you first need to complete Aranyaka: Part II - The World of Aranara. Once that's done, head to the area circled in the image below near the Gandharva Ville Statue of The Seven. A blue exclamation mark will appear in your World Map and mini-map once you get close to the area. You'll find a group of Eremites—speak to them to initiate the first quest in Agnihotra Sutra: Starry Night Chapter.

After speaking with the Eremites, an Aranara named Aranakin will greet you. He'll give you a Gadget called the "Kusava", which you need to equip throughout this quest to solve the broken Dendro Monument puzzles.

Use the Kusava to open up the path

When you encounter a broken Elemental Monument, activate the "Kusava" and use the directional keys to target the Monument. Then click on the Normal Attack button to repair the broken Monument. Click on the Gadget button again to exit the "Kusava" menu and apply Dendro onto the Monument to activate it. You'll need to do the same throughout the World Quest.

Lower the water level in the cave #1

Follow the quest marker to the cave where you'll be asked to lower the water level. Throughout this quest, we highly recommend activating all the Clusterleafs of Cultivation that you see so that you can have as many Four-Leaf Sigils as possible to navigate the terrain.

Inside the cave, you'll immediately spot a Seelie. We recommend following it, as it will guide you to the locations of all the broken Dendro Monuments that you need to lower the water level. Follow the Seelie to the first Dendro Monument on a landform on the left, then use the "Kusava" to repair the Monument. Follow it again toward the little house at the center of the cave and repair the broken Monument as well.

Now that the water level has been drained, jump down to the bottom of the cave and look for the Rukkashava Mushroom under the arch. Interact with it to continue the quest. Once that's done, follow the quest marker and use the Four-Leaf Sigils to head to the exit of the cave, then repair the broken Dendro Monument with the "Kusava" to open up a pathway leading outside.

Lower the water level in the cave #2

Follow the quest marker to the location of the second cave. After speaking with the Eremites, follow the path that leads further inside, where you'll be asked to lower the water level again. Head to the broken Dendro Monument and fix it with the "Kusava," then activate it to lower the water level. Once that's done, glide toward the center of the cave to interact with the Zorah Mushroom.

Follow the quest marker to the broken Dendro Monument and fix it with the "Kusava," then activate it to lower the water level.

Use the Kusava to break the seal on the Zorah Mushroom

Head to the edge of the cave where you'll find a blocked path. Summon Dendrograna and use it to attack the rock with a green core, which will reveal an opening leading further inside.

There are three broken rocks in total—two on the left and right of the entrance you just opened up, and one inside. Use the "Kusava" to repair the broken rocks, then interact with each of them to count toward the quest objective. Once all three have been repaired and touched, some Eremites will appear. Defeat them and head back to the Zorah Mushroom, only to find that it's disappeared.

Follow the quest marker and make use of Four-Leaf Sigils to help you find an exit. Head toward the cave above with a path lined by Stamina restoring flowers, then keep going until you reach a dead end with a breakable boulder. Break it with Geo Damage or a claymore (be careful of the bombs surrounding it), and the World Quest will complete after negotiating with the Eremites.

You'll learn the Rhythm of Revival, which will allow you to repair broken Elemental Monuments in place of the "Kusava." You'll also automatically unlock the next part of this World Quest: Risen Moon Chapter.

Check out our Genshin Impact A Prayer for Rain on the Fecund Land World Quest guide – Varuna Gatha, another prerequisite for Festival Utsava.