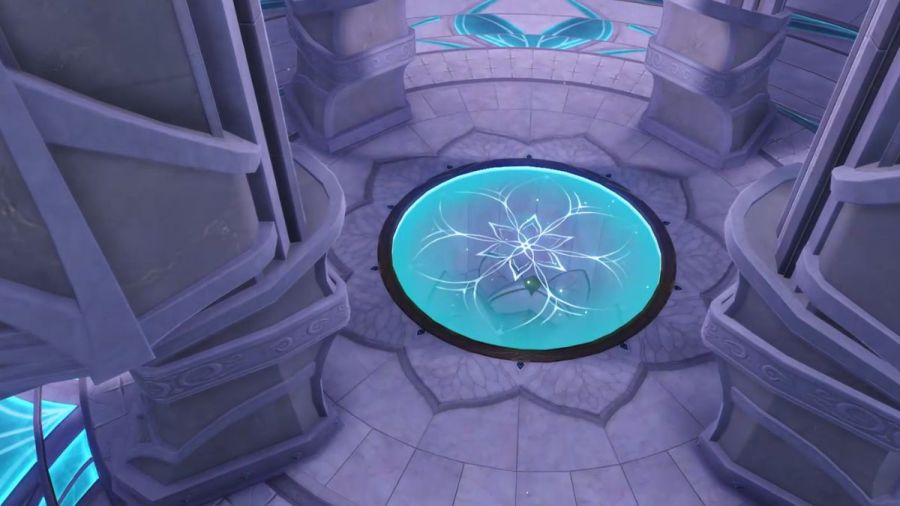 The Genshin Impact Sumeru Archon Quest Chapter III: Act V - Akasha Pulses, the Kalpa Flame Rises is divided into five sub-quests, the fourth of which is called Where the Boat of Consciousness Lies. After meeting up with Nahida in the Sanctuary of Surasthana, you must use the Waypoint inside the building to head to the Deus Foundry to witness the birth of a new god.

Before heading inside the Domain, make sure to prepare a battle-ready team, as you'll be encountering a lot of Fatui Skirmishers. Once inside, proceed forward and defeat the Hydro and Electro Fatui Skirmishers to open the door leading further in.

Turn left and hook onto the Four-Leaf Sigil, then hook onto another Four-Leaf Sigil immediately after. You'll find yourself on a small platform with pipes. You need to climb the pipe pictured above and head forward to enter the next room.

Follow the path to the large clearing, where you'll notice that the images on the ground are not rotated correctly. Your goal is to rotate the four layers on the ground to form a coherent image. Follow the quest marker toward the door east of the room (south of the mini-map) to proceed.

Related: How to unlock the Sumeru-themed Realm Layout in the Serenitea Pot in Genshin Impact

Keep going until you're at the edge of the metal platform, then carefully jump onto the moving platform. Wait for the elevator to stop in front of another metal platform, then hook onto the Four-Leaf Sigil on the opposite side (pictured above). Next, climb the pipe to find a room with an Anemo Fatui Skirmisher. Defeat him to proceed.

Once the enemy has been defeated, turn your attention to the device on the same platform. You need to rotate it twice or until the images on the ground turn blue. This indicates that you've correctly rotated the illustrations to their intended position.

Once that's done, look behind you, then turn left and look up to find a Four-Leaf Sigil. Hook onto the Four-Leaf Sigil to propel yourself upward, and follow by climbing the pipe on the same platform. Once you're up, the door will open, revealing a Cryo Fatui Skirmisher. Defeat him to reveal an Exquisite Chest and open the door to the next room. After looting the Chest, enter the room to find another device.

Rotate the device three times or until the second layer of images on the ground turns blue. This indicates that you've correctly rotated the illustrations to their intended position. Once that's done, turn back and follow the quest marker to another door that just opened. You'll find a device on the ground that controls the pathway of the mechanism.

Wait for the moving platform to come to you. But it won't stop moving, so once it's near you, immediately jump on it to ride. It will move toward a Common Chest that you can loot. After that, you can use the Four-Leaf Sigil to return to the device on the ground.

This time, you must rotate the device until the gear is facing the exact direction pictured above. This will allow you to travel west. Jump onto the moving platform when it gets near you, then head toward the locked Chest via a Four-Leaf Sigil. Defeat the Fatui Skirmisher to unlock the Common Chest and loot it.

In the same area, you'll find the third device. Rotate it three times or until the third layer of images on the ground turns blue. This indicates that you've correctly rotated the illustrations to their intended position.

Turn back toward the previous room and look up to find a Four-Leaf Sigil. Use it to get to the higher platform. From there, hook onto another Four-Leaf Sigil to reach a platform with two devices on the ground. You need to use them to control two moving platforms.

Start with the device on the right. Keep rotating it until the gear shifts to the exact position pictured above. Once that's done, rotate the device on the left once to activate the moving platform. Once it gets near, jump onto it and wait for it to take you to the other side. When the platform stops moving, jump onto the next area and climb the stairs to head to the next room.

Defeat the two Fatui Skirmishers to loot an Exquisite Chest and open the door leading further inside. You'll immediately spot the last device, which you need to rotate seven times or until the fourth layer of images on the ground turns blue. This indicates that you've correctly rotated the illustrations to their intended position.

An elevator will appear on the ground below, so glide toward it and step inside. You'll automatically be transported to another room directly outside the Scaramouche boss fight. After speaking to Nahida, the Domain will officially be completed. The quest will proceed with the boss fight against the Balladeer Boss, Shouki no Kami. Make sure to prepare a strong team to face off against the new god.

Check out our guide on How to farm Quelled Creeper in Genshin Impact – Dendro Hypostasis location & guide to gather materials for your favorite Dendro characters.