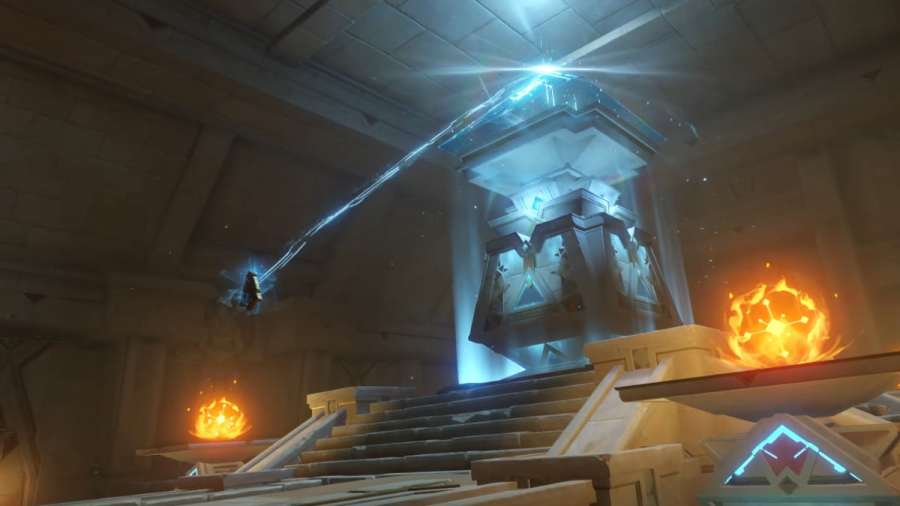 This guide will walk you through how to find the Place of Swallowing and solve all the puzzles to obtain clearance.

Head to the Teleport Waypoint south of The Mausoleum of King Deshret and enter the Duat Hall. You must glide toward the area the arrow points to in the image above to find a pyramid-shaped entrance. Upon entering, you'll find three torches that need to be lit using Primal Embers. All the Primal Embers are located in Duat Hall, and you can follow them in any order.

Teleport back to the Waypoint under The Mausoleum of King Deshret to enter Dual Hall. Turn right to find the first Primal Ember. Release it and begin following it back to its post.

When the Primal Ember attaches itself to the device pictured above, be careful and wait for the sandstorm to end on the small crevice in the ground. The Primal Ember can't pass through when Large Fan Blades are turned on, so wait until there is no airflow before releasing. The rest of the path is straightforward—follow the Primal Ember to the main room to complete this segment.

Related: Genshin Impact What Does This Button Do? & The Breakthrough hidden Achievement guide

Teleport back to the Waypoint under The Mausoleum of King Deshret to enter Dual Hall. Glide toward the floating platform pictured above to find the second Primal Ember. Release it and begin following it back to its post.

This part is pretty straightforward, but when you reach the point pictured above, you must wait for the Large Fan Blade to turn off. Otherwise, the Primal Ember will be blown away by the sand current. Once you're through, follow the Primal Ember to the main room until it lights up its designated torch.

Teleport back to the Waypoint under The Mausoleum of King Deshret to enter Dual Hall. Turn left to find the first Primal Ember. Release it and begin following it back to its post. This Primal Ember will take you on a tour around the floating platforms, so watch your step and glide carefully to avoid falling off.

As soon as you release the Primal Ember, it will float downward. You must wait until the Large Fan Blade turns off before prompting the Primal Ember to move again. Otherwise, the wind current will make the Ember float back to its previous post, and you'll have to start all over again. The rest of the path is straightforward—accompany the Primal Ember to the main room until it lights up its torch, completing this segment. A small cutscene will play, and you'll obtain one of the three clearances you need to complete this segment in the Dual Evidence World Quest.

Check out our Genshin Impact Afratu’s Dilemma World Quest guide to complete another important World Quest in the desert.