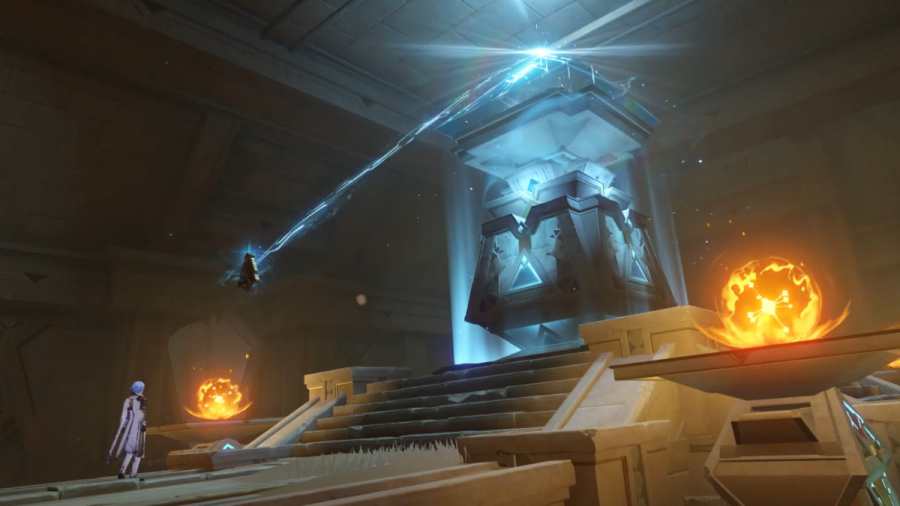 In this guide, we'll walk you through how to find the Place of Rebirth and solve all the puzzles to obtain clearance.

Head to the Teleport Waypoint north of The Dune of Magma and enter the crevice in front of the staircase. Once inside, enter the cave via the entrance behind the bonfire, then glide down as soon as you see the hole in the ground.

Once inside the room, head northwest to find a Forged Primal Light, which you need to place on the nearby platform to create a Verity Cell. A yellow diamond will appear over your head if you interact with the Verity Cell. As long as it's there, you can make Ghost Torches appear.

With that said, approach the four Ghost Torches in the room's four corners to make them appear. If the gold diamond above your head expires, touch the Verity Cell again to proceed. After making all four Torches appear, light them up using Pyro in any order.

Once all four Torches have been lit, two Primal Constructs will appear at the center of the clearing. Defeat them, then release the Primal Ember and follow it back to its post in the main room. This will further decrease the water level.

Head toward the pyramid-shaped entrance (located north in the mini-map) and follow the path until you reach an intersection down the stairs. You must turn right to find the puzzle. Please be warned that this puzzle is bugged. If you find the solution below isn't working, we highly recommend logging out and back in to debug.

To solve this puzzle, you need to form two Primal Beams. This can be done by alternately moving the Cells in each of the two devices in the room. Follow these steps:

This will unlock the device at the center of the room. If the Primal Beams are not connecting or if nothing happens, relog to debug the game.

Interact with the device to release the Primal Ember and follow it back to its post in the main room. Keep releasing it when it attaches to another device, and make sure to interact with the Control Unit in front of the locked gate so you can go through. Once that's done, a cutscene will play, and you will gain the first of three clearances you need to complete this segment in the Dual Evidence World Quest.