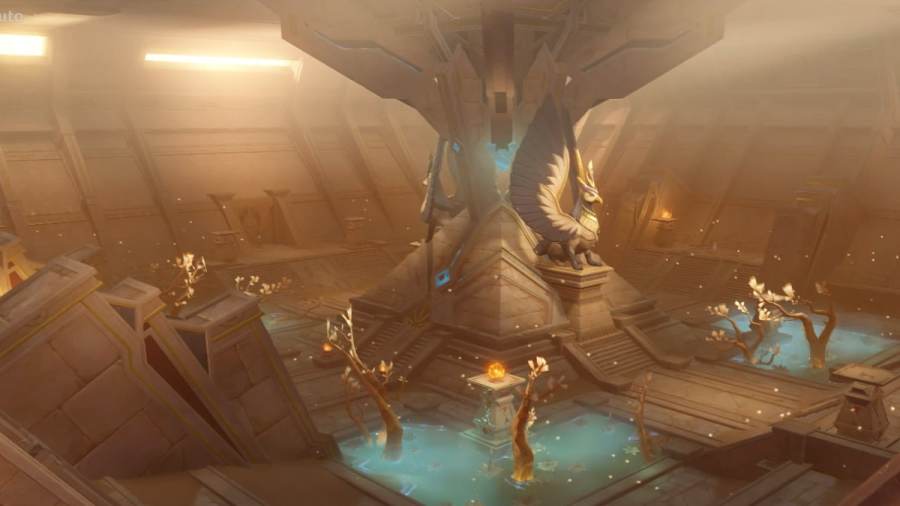 Dual Evidence is the first World Quest in the Old Notes and New Friends questline, where you meet an old researcher named Soheil, who refuses to believe that you and Tirzad's archaeological findings hold any truth. Prove him wrong by presenting him with a stone slate containing full clearance.

To unlock the Old Notes and New Friends, you must first complete the entire Golden Slumber World Questline:

Once you're done with all the above, return to Aaru Village to automatically prompt dialogue with a researcher named Kalantari. If the dialogue doesn't automatically start, you'll find an NPC named ??? nearby—speak with him to initiate the first quest under Old Notes and New Friends: Dual Evidence.

The quest marker doesn't work as it usually does while exploring the underground ruins in Dual Evidence. To help you get from one place to another, head to your Quest Item Inventory and open the Scarlet Sand Slate. Switch to the third tab and select the area you want to explore, then click Go when you're ready. The navigator will look like an icon of a slate on the World Map and mini-map.

After speaking with Kalantari, walk toward Aaru Village and speak with an old man named Soheil near the Teleport Waypoint. He thinks you're a fraud, so you must prove him wrong by further discovering the secrets behind the stone slate. From this point, you must use the Scarlet Sand Slate to navigate—see above for a quick guide on how to do so.

Related: Genshin Impact What Does This Button Do? & The Breakthrough hidden Achievement guide

Go to the location indicated by the stone slate

You must wait until there is no air current coming from the hole in the ground, as it will blow away the Primal Ember. So wait until the fan below is turned off, then release the Primal Ember and plunge alongside it. Release it again, and follow it until it lights up the torch in the previous room.

The entrance between the two torches will open, allowing you to enter. There's a Forged Prism Light, but you can ignore it if you wish, as it's irrelevant to this quest. Plunge to find an optional puzzle. Head to the other side of the room (behind the branches) to find a hole in the ground, which is a little hard to spot as it camouflages with the environment. Plunge to proceed with the quest.

You'll immediately spot a Seelie. While optional, we recommend following it, as it will lead the way. Otherwise, just follow the path forward until you see a huge clearing. There, you'll spot a Teleport Waypoint that you can activate to make it easier to return later on.

Next, follow the path eastward, where you'll find a staircase leading up to a pyramid-shaped entrance. Enter the building to spot another Seelie, which we recommend following as it will lead the way. Otherwise, turn right and keep going forward until you spot another Teleport Waypoint that you can likewise activate for ease of travel.

Interact with the Control Unit to open the gate, then press on to prompt dialogue with Paimon, completing this objective.

In this segment, you must enter three areas and solve puzzles to get the rest of the clearance to complete your stone slate. Apart from being a required quest objective, this will also allow you to solve all of the puzzles in the desert. You can head to the three areas in any order:

Head to the Dual Hall through the Teleport Waypoint south of The Mausoleum of King Deshret, circled above. Then glide toward the staircase at the other side of the Hall. Enter the pyramid-shaped entrance to prompt dialogue with Paimon.

In this segment, you must interact with each Control Unit in front of the devices situated in the room's four corners. You can do so in any order. Once that's done, a small cutscene and dialogue with Paimon will play. Then head to the front of the giant device, climb the staircase, and walk through the blue barrier to enter another room. You'll unlock the Wonders of the World Achievement called The Straight Path.

This part is fairly simple. You must release the three Primal Embers in the room and lead them back to their posts. You can use the regular quest navigator to find their exact locations. Once you release a Primal Ember, it will attach to another device and summon two Primal Constructs, so get ready for battle! You must release the Primal Ember again until it reaches the Torch. Once all three are done, head to the front of the device at the center to find a glowing spot that you must interact with to prompt a cutscene.

You'll be teleported to a clearing where you must engage in a boss battle against a Field Annihilation Array. Defeat it to complete this segment. After the small cutscene, interact with the Precious Chest to obtain a Quest Item called the Record of Aaru's Shut. Bring it back to Soheil in Aaru Village to complete the World Quest. You'll also unlock the second part of the Old Notes and New Friends questline, Soheil's Wish.

Check out our Genshin Impact Afratu’s Dilemma World Quest guide to complete another important quest in the desert.