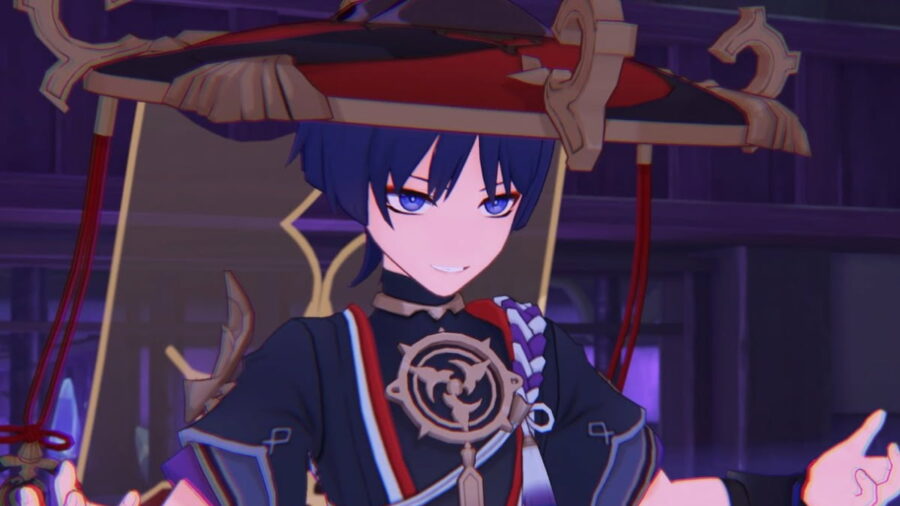 Scaramouche is a Fatui Harbinger who has attracted a loyal fanbase after his appearance in Genshin Impact's Version 1.1 event, Unreconciled Stars. While his snarky personality is an acquired taste, his iconic veil was one of the first indications of Inazuman culture, hyping the community for the nation of eternity early into the game's release. However, Inazuma came and gone, and while Scaramouche plays the important role of being Ei's failed puppet (a predecessor to the perfected Raiden Shogun), he made only a handful of appearances in an Archon Quest and event. He never became a playable character.

But early Sumeru leaks revived the army of self-proclaimed Scaramouche mains, as he has been rumored to be released as both a Weekly Boss and a playable character. The leaks surrounding him were controversial after popular Sumeru leaker @hxg_diluc revealed that Scaramouche would be redesigned—with a new outfit that allegedly removes his fan-favorite veil.

Little has been said about Scaramouche's updated appearance until new leaker @ZiaoBi posted a series of hints surrounding the Wanderer's new fit. According to them, Scaramouche's color palette will consist of deep blues, with kimono sleeves similar to Kazuha's—except with mismatched colors. The pattern of his clothing has been described as quaint, cute, and sentimental, although it's difficult to put these adjectives into concrete imagery. Most importantly, he was described as having an open-chest kimono.

Related: Which Inazuma character are you? Genshin Impact QUIZ

His socks are rumored to receive an aesthetic makeover, with embellishments to enhance their visual appeal. While fans might have to say goodbye to Scaramouche's beautiful veil, @ZiaoBi stated that his hat and bottoms might remain the same. Scaramouche has long been rumored to hold an Anemo Vision, which is rumored to live on his left chest.

It's important to know that leaker @ZiaoBi has not seen the leaked image of Scaramouche's design and is simply relaying bits from what is allegedly a detailed description of what the character looks like. Fans of Scaramouche, the Wanderer (Balladeer, Kunikuzushi, or whichever of his many names you prefer) should take these leaks with a grain of salt, as there is no certainty in their validity.

Excited for other characters coming to the game? Check out our list of All Dendro Characters in Genshin Impact – Current and Future.