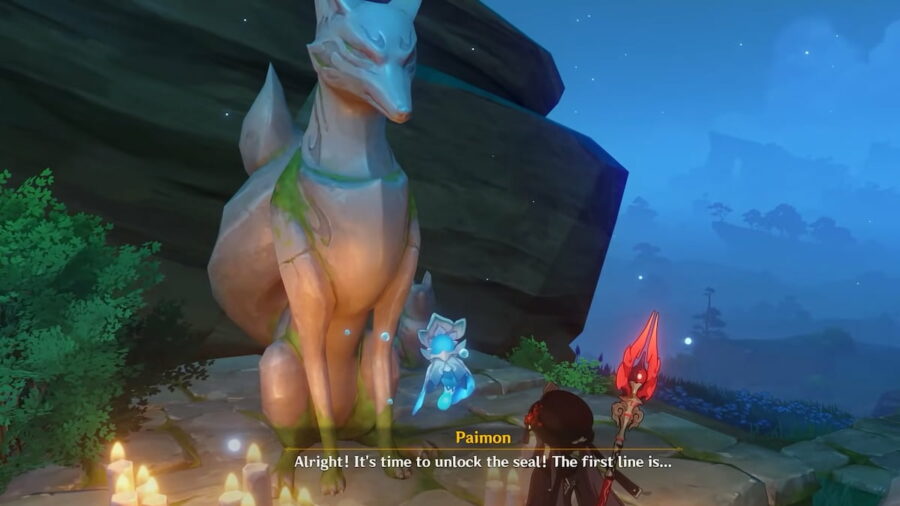 With little direction and silent ghosts standing around, players may be a little lost on how to complete the Sacrificial Offering quest within Genshin Impact. This quest involves ghosts, fox statues, and an abandoned shrine. It's all fairly simple, just not straightforward.

After starting the Sacrificial Offering quest, players will need to head to the Abandoned Shrine between Mt. Yougou and the Chinju Forest. Players will be given a general area to search in, but the shrine can be found on the middle-eastern edge of this highlighted area. Once the players reach the shrine, they should be able to find a Mysterious Shadow standing before the main shrine.

Players will need to speak with this ghost to move them in front of one of the fox statues. From here, turn around and head to the ghost in the far left area off of the path. Speak with her to have her stand in front of another fox statue. Once they are in front of one, do not speak to them again or it will reset their location.

Related: How to get The Nine-Word Rumor hidden Achievement in The Chasm in Genshin Impact

After this has been completed, players will need to head to the shrine at the top of Mt. Yougou. Here, players can interact with the lady up there, and she'll grant players an interactable item to figure out what happened. Players will then need to use the item to further investigate the abandoned shrine.

Inspecting the Abandoned Shrine with the Memento Lens

Back at the Abandoned Shrine, players will need to equip the Memento Lens from the Gadgets menu to use it on all of the blue, glowing, smaller fox statues. When scanning these, players do not need to complete them in any particular order. All five should correlate with where each of the women were standing previously.

After this, interact with the big fox statue where the second woman spoken to was standing. Players will need to answer the three questions given by the statue correctly. These answers will be related to what players saw with the Memento Lens.

Related: How to solve the hidden Precious Chest puzzle in Fuao Vale in The Chasm in Genshin Impact

Afterward, grab the ward from the shrine and head to the west shore of the small lake nearby. Players will need to enter the cave here to discover the barrier they need to destroy. To start this prayer puzzle, players will need to purify the unlit lantern in front of the gate with the ward.

To finish the puzzle, players will need to label the lanterns. It's fairly simple. The one at the center of the gate is a two, all the rest should be labeled as a three. The front lantern can't be changed, so don't worry about it.

After completing this puzzle, players will be initiated into a fight with the Mysterious Samurai. He will be the final boss here. Defeat him to complete the quest and move on to the third part of the questline.

For more Genshin Impact content, be sure to check out How to unlock the upside-down Teleport Waypoint in The Chasm Underground Mine in Genshin Impact on Pro Game Guides.