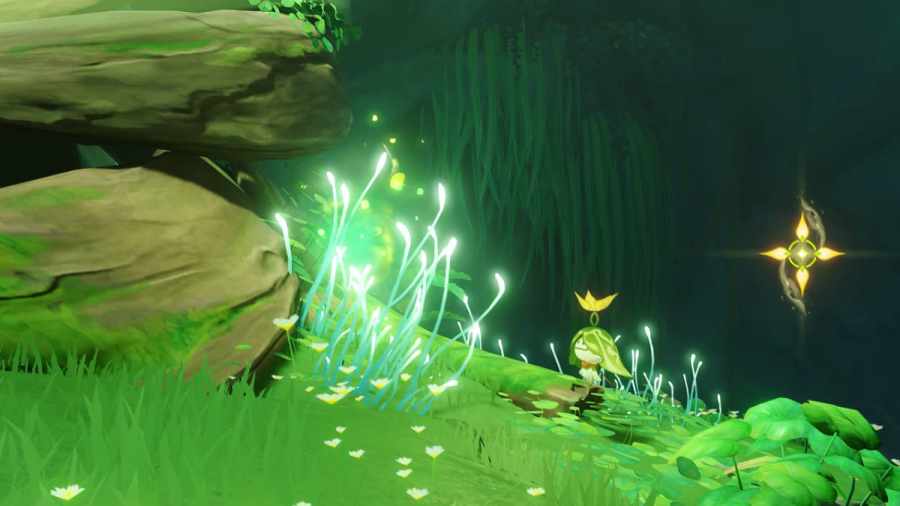 The Rhythm that Reveals the Beastly Trail is a Sumeru World Quest that’s part of the Aranyaka: Part II - Dream Nursery World Questline. After getting rid of the Withering inside the cave east of Devantaka Mountain, you’ll be asked to investigate the trees inside Ashvattha’s Concourse. Arama will then prompt you to enter the Vasara Tree’s dream to find the Vasoma Fruit.

Before starting, prepare a team with at least one Dendro character and one bow user. Use the Four-Leaf Sigil to head to the tree in the Ashvattha's Concourse, then interact with the glowing spot at the tree's base to prompt a dialogue with Arama, who'll ask you if you're ready to enter the Vasara Tree's dream. Respond with (Reach your hand to the Vasara Tree...) to enter the Domain.

Once inside, turn left and use the Vintage Lyre to play the Rhythm of the Beastly Trail (do > so > la > mi > do on the third row) in front of the Claustroflora to delete the giant flower at the center of the clearing. This will reveal an opening that leads further underground. Glide down and defeat the fungi to disperse the barrier and interact with the plant to pick up a Primeval Rosin.

Related: How to unlock the Fragment of Childhood Dreams Domain in Sumeru in Genshin Impact

An opening to a path leading further inside will also open up. Follow the path until you reach a clearing with some fungi and another Claustroflora. Defeat the fungi and use the Vintage Lyre to play the Rhythm of the Beastly Trail (do > so > la > mi > do on the third row) in front of the Claustroflora to remove the giant tree at the center.

Doing so will reveal a Bouncy Mushroom. Use it to propel yourself upward and pick up the second Primeval Rosin. Follow the path lined by lilypads to find a clearing with a locked Precious Chest. Defeat the fungi to unlock the Precious Chest and loot. After that, turn left and apply Dendro onto the Clusterleaf of Cultivation to release Four-Leaf Sigils to propel you upward.

Next, solve the Dendrograna shooting puzzle to disperse the barrier. Pick up the third Primeval Rosin. After that, carefully glide down the entrance on the ground. Be careful and glide onto the platform in the middle, not the very bottom. If you glide to the bottom, you'll return to the entrance of the Domain and must run back.

Approach the orange entrance and wait for the Primeval Rosins to merge with it. Then interact with the door to activate, opening up a path to the last room in the Domain. Simply defeat all the fungi in the clearing to complete the Vasara Tree's dream. Exit the dream and pick up the Vasoma Fruit, agreen glowing object beside Arama, to complete the World Quest.