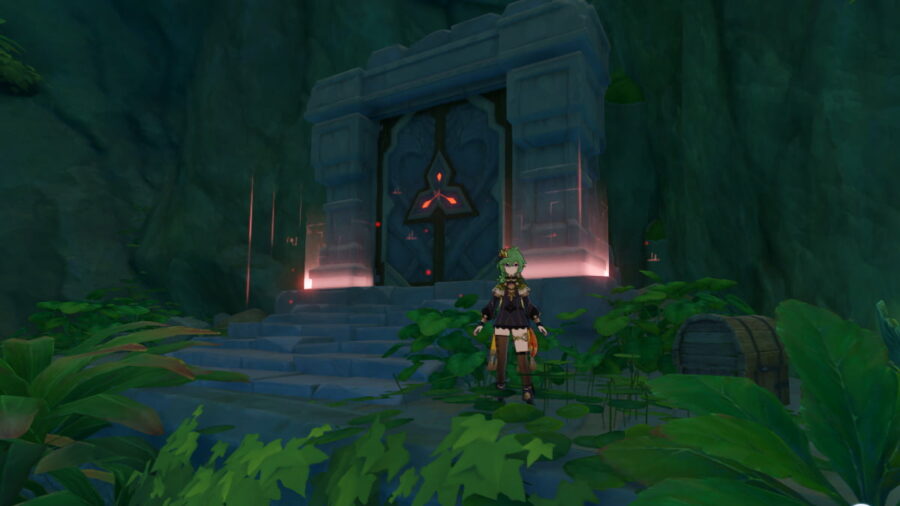 The Fragment of Childhood Dreams is a Domain situated vertically between the Vissudha Field and Ashavan Realm. It's strategically located underground in an area submerged in water, making it impossible to find without solving a few puzzles along the way.

Where is the Fragment of Childhood Dreams Domain in Genshin Impact?

Related: How to find the hidden song in the Genshin Impact The Rhythm that Leads to a Gloomy Path World Quest

Follow the path forward until you reach a clearing with the Dendro Monument puzzle you previously solved while unlocking the Teleport Waypoint. Go down the stairs to find a clearing filled with Ruin Sentinels. Defeat all enemies to unlock the mechanism in front of a circular door. Once that's done, interact with the mechanism to open the door and follow the path forward. Keep in mind that you'll have to climb a few short walls along the way, but there are no intersections, so just move forward.

Eventually, you'll find yourself in an area with a Dendrograna shooting puzzle. Summon Dendrograna by interacting with the Auspicious Branch circled in the image above, then shoot at the floating projectile. Two more projectiles will appear consequently—shoot them with Dendrograna to complete the puzzle and get a Common Chest reward. The Domain will also emerge from the ground. Make sure to interact with it once so that it becomes a Waypoint that you can conveniently teleport to anytime!

Check out our Genshin Impact The Children of Vimara Village World Quest guide – Aranyaka Part 1 to start the most important quest in Sumeru.