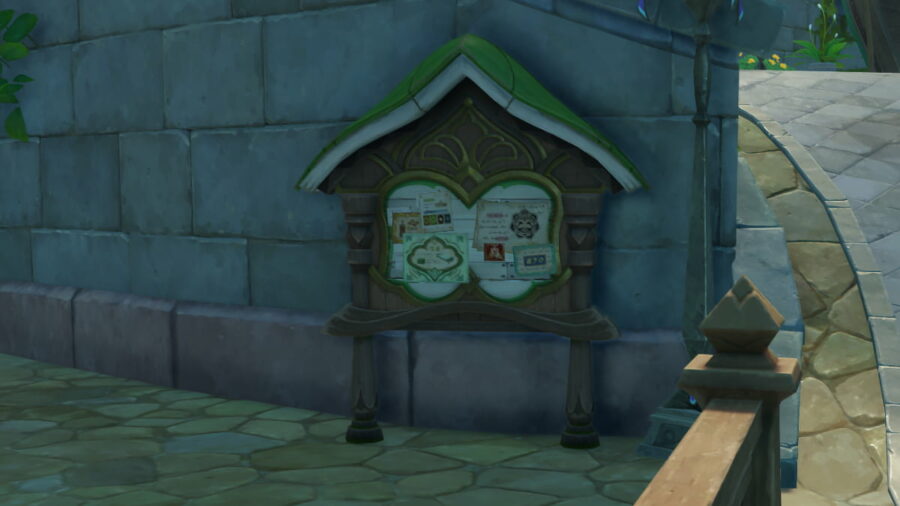 Drusus' Riddle is a Hidden Exploration Objective that you can unlock by interacting with the bulletin board in Sumeru City's Adventurer's Guild. You must follow the clues in each riddle until they eventually lead you to Drusus, the Akademiya researcher who loves making riddles. This puzzle is also the prerequisite to a World Quest called Treasure of Wisdom: A New Plan.

To unlock this puzzle, you must first complete the following prerequisites:

Once they're done, head to the Sumeru City Adventurer's Guild in Treasures Street, located in front of Katheryne. Investigate the bulletin board to prompt dialogue with the Branch Master, Kamal, who will tell you about a series of riddles by Drusus. This officially begins the search for the riddles scattered all over the city.

After interacting with the bulletin board, head to the southwestern part of Sumeru City, where you'll find a small box hidden in the water under the bridge. Swim to the box and Investigate it to obtain the first Riddle Note.

Based on the clue from the first Riddle Note, head to the Grand Bazaar through the tunnel near the Blacksmith. Reference the image above to help you find your way. Once inside, turn left to immediately spot a fountain.

The second Riddle Note is located inside the fountain. When you step foot inside, face the street and turn left to find a small box—Investigate it to obtain the Quest Item.

Once inside, go down the stairs and under the bridge, where you'll find an Exquisite Chest (facing the side of the entrance). Interact with the Chest to obtain the third Riddle Note. Keep in mind that this Chest will not grant you Dendro Sigils and does not count toward the Sumeru Chest collection Achievements.

You can find the fourth Riddle Note on a pond in the western part of Sumeru City—its exact location is circled in the image above. Investigate the box in the water to obtain the Quest Item.

Head to the Sanctuary of Surasthana on the westmost part of Sumeru City (circled in the image above) and change the in-game time to 12:00. An NPC named Drusus will spawn by the balcony. Interact with him to complete this Hidden Exploration Objective. You'll also unlock the Wonders of the World Achievement called "I've Got it! I've Got it!".