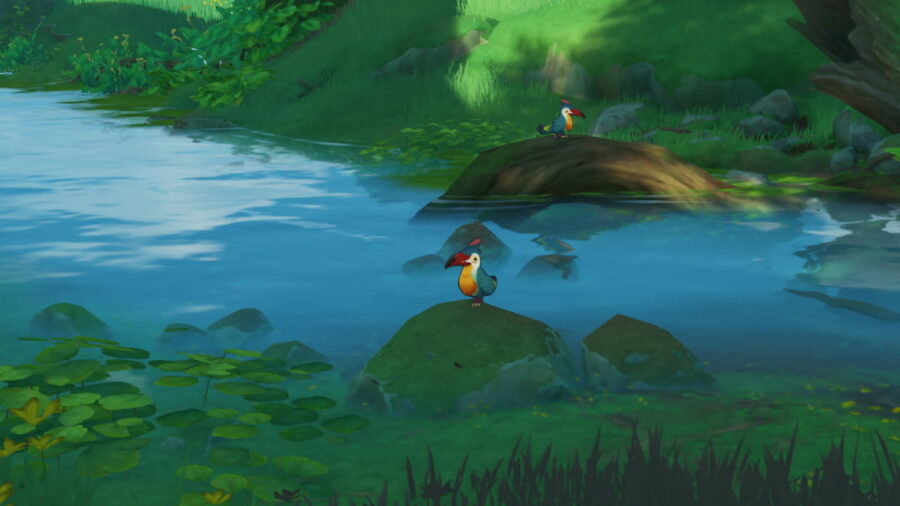 A Short Encounter with a Rare Bird is a hidden Sumeru World Quest where you play your part in helping protect the nation of wisdom's wildlife from poachers—while falling into a scam along the way.

To unlock A Short Encounter with a Rare Bird, we highly recommend that you complete the entire Varuna Gatha World Questline first in order to unlock the Varuna Contraption, which will allow you to change the weather in Apam Woods. This will make it a lot easier to complete the quest. You might be able to complete it by finessing the area's weather conditions, but doing this prerequisite will save you a lot of time.

Once you're ready, head to the area circled in the image above, where you will find three little Shroomboards lounging around. You need to attack all three of them at the same time, which you can do with an archer's Charged Attack. Be careful not to startle them before you kill them. If you have Aloy, you can put her in your team to help.

After killing all three Shroomboars at the same time, an NPC named ??? will appear over the horizon. Speak with him to initiate the World Quest.

The NPC will introduce himself as Shefket, a researcher looking into Sumeru's wildlife. He needs your help looking for Dawn Bird feather samples for his project. You need to head to the south of Apam Woods to find your first sample—its exact location is circled in the image above.

Before going, make sure to equip Omni-Ubiquity Nets from the Gadget Inventory. If you don't have any, you can purchase some from Wakamurasaki near Hanamizaka in Inazuma. Also, make sure to change Apam Woods' weather to sunny, as Dawn Birds do not appear on rainy days.

Once you're ready, head to the area circled in the image above and use the Omni-Ubiquity Net to capture a Dawn Bird. Some Eremites will appear. Defeat them and speak to Shefket, who will spawn in the area.

Next, follow the quest marker to the north of Apam Woods where you'll find another group of Dawn Birds. Capture one of them with the Omni-Ubiquity Net. Like before, some Eremites will appear, but they won't attack you this time around.

Follow the quest marker to the east of Apam Woods and capture one more Dawn Bird with the Omni-Ubiquity Net. This will prompt dialogue with Shefket and the Eremites. Defeat the Treasure Hoarders that spawn after to complete this World Quest.

Check out our Genshin Impact Where Are the Fierce Creatures? hidden World Quest guide for another quest surrounding Sumeru's wildlife.