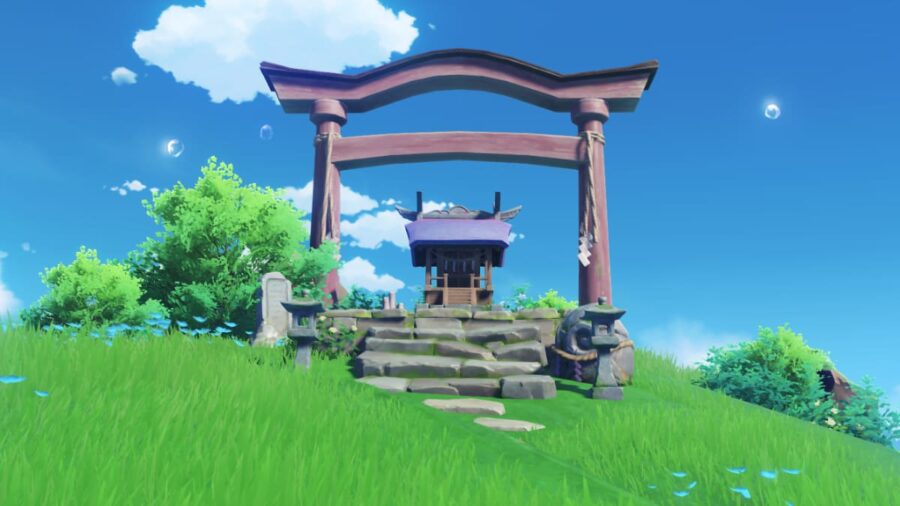 Start by heading to the top of the cliff northwest of Watatsumi Island. Its exact location is marked in the image below. Make sure to bring your best combat team, as there's a big battle up ahead!

Upon reaching the area, you'll find a locked shrine with a Stone Tablet beside it. Read the Stone Tablet to prompt the Ley Line Monolith in front of the shrine to become interact-able. Likewise, interact with it to begin the battle.

The only goal in this battle is to protect the Ley Line Monolith for five minutes. You don't need to kill all the enemies. But they're pretty strong, so you can't just stand around and do nothing as they'll quickly destroy the Monolith.

Each enemy defeated will reduce the timer by five seconds. If your party isn't strong enough to defeat them, try stalling using a Freeze team. A budget option would be to use a combination of Barbara and Kaeya or Chongyun—or both.

If you fail, don't worry as you can try any number of times. After successfully protecting the Ley Line Monolith, the shrine will unlock and a glowing purple item will appear in the middle. Interact with it to pick up a Spirit Pearl.

How to install Live Genshin Impact Wallpapers on your PC

All “The Boar Princess” series locations in Genshin Impact