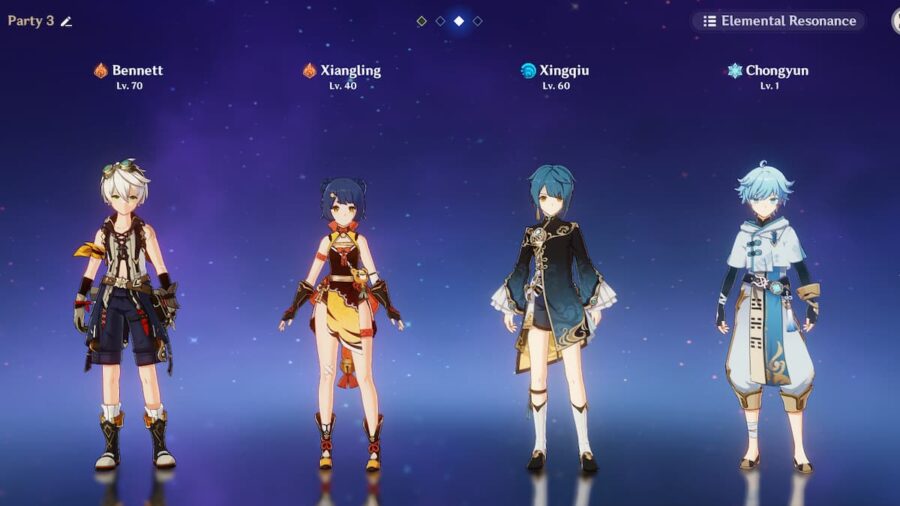 Genshin Impact allows players to customize their playstyle by configuring various teams of four to take on an array of challenges. Whether you're fighting bosses, hunting monsters in the open world, or tackling the Spiral Abyss dungeon, these are some of the best team comps that can help you explore the world of Teyvat.

The National Team is a flexible comp with easy-to-get characters who can help you clear almost any content in the game. It has two core pillars: Pyro Resonance (+25 percent attack bonus) and elemental reactions (Melt, Freeze, Vaporize). Chongyun is easily replaceable with Sucrose for Swirl damage, Raiden Shogun or Fischl for Overload damage, or even Diona or Zhongli for a shield bonus.

The Morgana team is a popular comp that dominates the large hordes of enemies on the Spiral Abyss floors. It utilizes Venti's Elemental Burst for crowd control, Mona's Elemental Burst to apply Wet and obtain a damage bonus, and Ganyu's Elemental Burst to deal AoE Freeze damage. Meanwhile, Diona helps the team by enabling Cryo Resonance (+15 percent crit rate for enemies affected by Cryo) while acting as a heal/shield/Energy Recharge support.

Though this team is expensive and difficult to replicate with other characters, you can create similar Permafreeze comps by replacing Venti with Kazuha or Sucrose, Mona with Xingqiu, Barbara, or Kokomi, and Ganyu with Ayaka, Kaeya, or Rosaria.

Related: How to Switch Characters in Genshin Impact

This team is made up of the game's four Geo characters, with Zhongli performing as a shield support/Burst DPS, Ningguang as Main DPS, Noelle as a healer, and Albedo as a Sub/Burst DPS. These roles are flexible, which means that you can make Noelle the Main DPS if you wish or have everyone act as a Burst DPS by spamming their Elemental Burst skills—especially as you generate plenty of Geo energy with this comp.

Alternatively, you can swap out Noelle for Bennett for more utility or bring in Raiden Shogun or Xingqiu for off-field damage. Keep in mind that you need at least two Geo characters to get the Resonance bonus, which gives +15 percent shield strength, +15 percent damage, and -20 percent enemy Geo resistance to characters protected by a shield.

Vaporize comps offer massive, consistent damage—especially when paired with a reliable Hydro applicator like Xingqiu. His Elemental Burst will allow Klee, Hu Tao, Diluc, Xiangling, or Yanfei to cause Vaporize reactions while spamming Pyro attacks, as the swords will consistently apply the Wet status to enemies. Bennett helps the team as a healer/Burst DPS, while Mona, Kokomi, or Barbara will allow you to apply Hydro even when Xingqiu's burst is off.

Alternatively, you can replace Mona with an Anemo character for crowd control—such as Kazuha, Sucrose, or Venti. Or you can replace her with an Electro Sub-DPS, such as Raiden Shogun, Fischl, or Beidou, to trigger the Overload reaction.

Superconduct is a great physical resistance shredder that can make it easier to defeat enemies with high HP. As the Main DPS, Razor synergizes well with off-field supports such as Xingqiu and Fischl or Raiden Shogun. Meanwhile, Diona will help apply Cryo to trigger Superconduct while acting as a shield/heal support. Alternatively, you can use Rosaria, Ayaka, Ganyu or Kaeya as the Main DPS and still trigger similar reactions with a similar team comp.

While any Cryo main DPS works for this comp, characters that can apply constant Cryo—such as Ganyu, Ayaka, and Chongyun—work especially well. Paired with Xiangling, who can apply off-field Pyro with her burst, you can constantly spam the Melt reaction and defeat enemies very quickly. Meanwhile, you have plenty of options for supports. Bennett helps trigger Pyro Resonance while offering overall utility. Diona helps with Cryo Resonance and has a reliable shield, but you can also replace her with a crowd-control character such as Venti, Kazuha, or Sucrose.

Anemo Resonance is a great asset for exploration, as it offers -15 percent stamina consumption and +10 percent movement speed. Ayaka or Mona have unique sprint skills that allow them to cross water quickly while consuming less stamina. Meanwhile, Zhongli and Razor can help you mine ores and crystals easily with their skills. You might also want to swap out your water-walker with Ningguang (to help find ores), Klee (to help find Monstadt materials), or Qiqi (to help find Liyue materials).