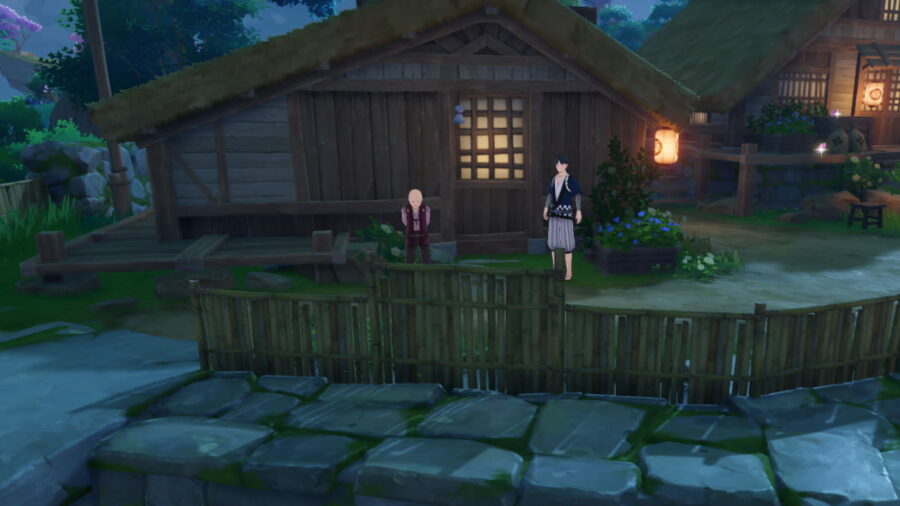 The Farmer's Treasure covers the story of Saimon Jirou, who decided to quit the Shogun Army to go off and wander on his own. After hearing of a Farmer's Treasure, he sought for it before eventually finding himself caged up in Jinren Island.

Once you have all four Old Stone Slates on hand, The Farmer's Treasure will appear in your Quest menu. It will bring you back to Jinren Island, where Saimon Jirou awaits. Speak with him to find out about the existence of a fifth Stone Slate in Araumi Island.

Your goal is to find piles of dirt on the ground, which you can interact with by Digging. A quest marker will highlight your search area on the mini-map, so make sure to reference it to stay within the correct vicinity.

After going through all the piles of dirt, you find no Stone Slate. The next part of the quest will trigger, prompting you to head back to Saimon Jirou on the small islet in Jinren Island—only to find that he's disappeared.

Arguing with the Kairagi Leader

Head to the larger islet in Jinren Island and climb up the mountain. To your surprise, Saimon Jirou has been captured and caged up once again by a Nameless Bandit. It seems that his attempt at scamming you wasn't the first, as the Kairagi also fell victim to his antics. After a fruitless discussion, you decide that the treasure is yours, prompting enemies to appear.

Related: How to get the Memento Lens in Genshin Impact

Puzzle Inside the Gate

After defeating all enemies, you will receive the "Treasury" Key, which can be used to open the nearby gate. Upon opening it, drop down to find a blocked wall and a broken Light-Up Tile puzzle.

The Light-Up Tile puzzle can be fixed by interacting with the missing tiles. Choosing to Open them will surrender one Old Stone Slate for each tile. You need to use all four to complete this part.

Assuming that the locked door is facing north, follow the exact route above to complete the Light-Up Tile puzzle. While doing the puzzle, you can't step out of the tiles or step on a tile outside of the route, or the puzzle will fail. Don't worry if you make a mistake—you can keep trying until you get it right!

When you complete the route as prescribed above, the tiles will automatically light up and open the door. Inside, you'll find various Investigate spots and a Common Chest. Interacting with the Common Chest will prompt the quest to proceed. You and Saimon Jirou find out that there was nothing of value hidden after all.

The quest will prompt you to return to Konda Village to turn Saimon Jirou in to his parents, Saimon Katsumi and Saimon Eri. The World Quest will complete after the dialogue, and you'll unlock the Achievement Underground... Overrated?

Check out our guide on How to solve the Araumi Puzzle in Genshin Impact to uncover more secrets in Inazuma's underground walkways.