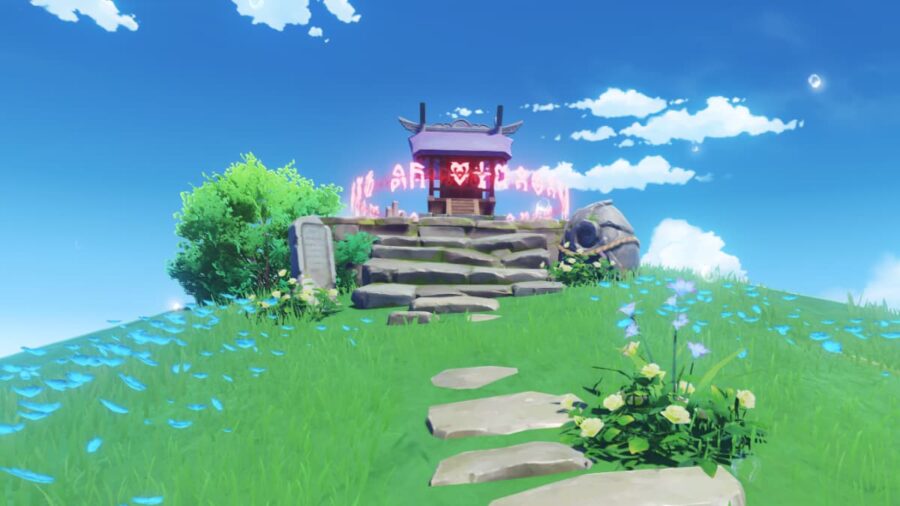 The "Fin of Watatsumi" is one of the five segments in The Moon-Bathed Deep World Quest, which can be activated by speaking with Tsukuyo in the Sangnonomiya Shrine. It's one of the four segments that lead into the fifth—the former can be completed in no particular order.

When you're ready to start this segment, head to the edge of the westernmost cliff on the islet north of Watatsumi Island. Its exact location is marked in the image below.

There, you'll find a locked shrine and a Stone Tablet. Interact with the Stone Tablet, which will prompt you to solve the Fish Statue puzzles in the vicinity.

Related: How to complete the “Eye of Watatsumi” in Genshin Impact

There are two Fish Statue puzzles in the area—both of which can be solved with the same solution. However, you must do them one at a time. Doing them simultaneously will mess up the progression of the first, as one Fish Statue from each puzzle is connected with one another.

Your goal is to rotate each Fish Statue until blue lines begin to appear underneath them. When blue lines appear under all three, they will form a watery connection in the middle. Once that happens, interact with the Mysterious Statue to lock the Fish Statues in place.

It's very important to interact with the Mysterious Statue before proceeding with the next puzzle, which can be completed in the exact same way. When that's done, the shrine will unlock and a glowing purple object will appear in the middle. Interact with it to obtain a Spirit Pearl.

How to get to Enkanomiya in Genshin Impact