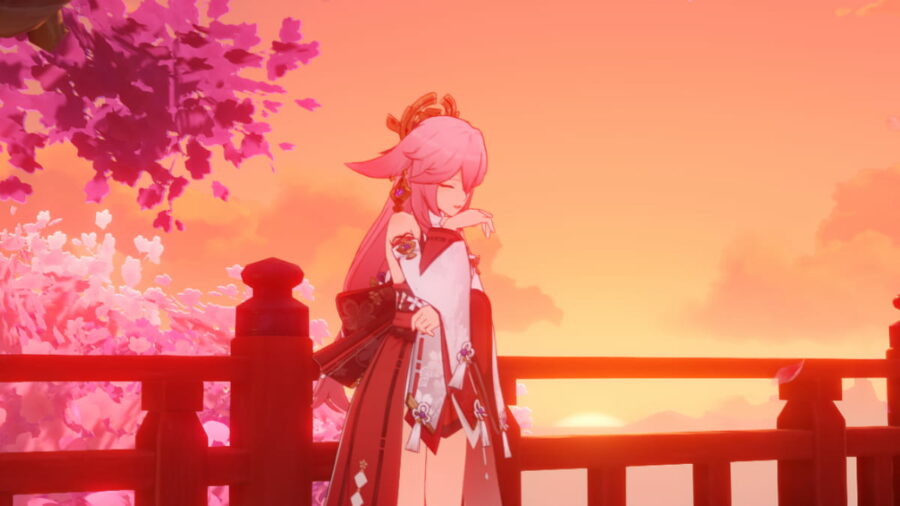 Yae Miko's Story Quest, the Divina Vulpes Chapter: Act I—The Great Narukami Offering, can be unlocked with one Story Key from the quest menu after completing the following prerequisites:

The quest follows a mysterious urban legend about an incantation that can grant wishes. After playing through the first half, which is filled with dialogues and a guided exorcism, you'll be prompted to enter a Domain to summon an "evil spirit" yourself.

Upon entering the Domain, some Kairagi will block your way. Defeat them to loot the Chest in front of the door, which will automatically open and let you pass through.

Once inside the room with a mirror, interact with the lever on the wall to pull the Electro lamp stand downward. Attack it with Electro to turn it on (indicated by the purple glow). Yae Miko, whose Normal Attacks inflict Electro, will accompany you to this Domain, so you don't have to bring another Electro applicator.

Related: How to get the “A Mask” furnishing Genshin Impact

After, step on the platform on the right of the large mirror and interact with the lever beside it. The platform doubles up as an elevator that will bring you one floor down. Defeat the Treasure Hoarders, then activate the lamp stand in the room using Electro.

At the edge of the room, you'll find an opening where you can jump down one more floor below. Defeat the Kairagi to unlock and loot the Exquisite Chest.

On the left of the Chest, you'll find another elevator. Step onto the platform and interact with the lever to bring you one floor up. You'll find a Wind Current through a hole in the wall. Use it to propel you upward to the next floor.

You'll find yourself in a room full of moving walls. It's important to move all the walls until you've uncovered the rooms behind each of them, as you'll find some Common Chests behind a few. You may need to move some walls to unblock others—there isn't a specific order that you need to follow to complete them.

When you encounter a room with a Wind Current, ignore it and turn right. Open the walls from there, and you'll reach your objective: the room with a Common Chest and lever.

Loot the Chest and step on the platform in front of the lever before interacting with it. This will activate the elevator that will bring you back to the first room with a giant mirror.

Activate the last two lamp stands using Electro to prompt a long cutscene to play. You'll be introduced to Urakusai, who had watched over Yae Miko as a child. After the cutscene, the Domain will be complete. Don't forget to loot the Precious Chest before leaving.

Yae Miko's Story Quest isn't quite over, so make sure to head to the Grand Narukami Shrine to continue it—there's a gorgeous ritual that will follow.

Check out our guide on How to unlock the Raiden Shogun Weekly Boss in Genshin Impact — End of the Oneiric Euthymia Domain to complete the prerequisite to Yae Miko's Story Quest.