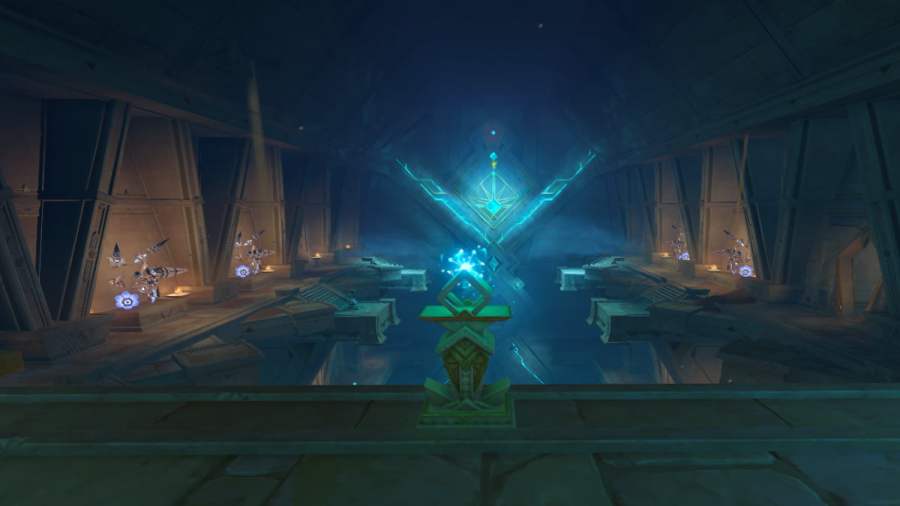 When you first explore Sekhem Hall in The Mausoleum of King Deshret, you may find it halfway filled with water. By draining the water flooding the interior, you can unlock a puzzle that will reward you with three amazing Chests.

Before starting, make sure you have unlocked Sekhem Hall by completing the Dual Evidence World Quest. Doing so will also unlock full clearance, allowing for seamless exploration in the desert.

Head to the Teleport Waypoint circled in the image above to find Sekhem Hall, which is hidden in the depths of The Mausoleum of King Deshret. You'll immediately spot a huge opening leading farther below, except it's half-drowned in water. You must glide toward the lower floor on the left, where the arrow is pointing in the image above.

You'll spot two devices with Primal Beams connecting to Elemental Monuments on the other side. This functions as a control. If both Cells are facing the same Elemental Monuments, the corresponding Monuments will unlock, automatically prompting environmental changes:

Once both Primal Beams are connected to the Hydro Monuments, a small cutscene will play, and the water in the room will fully drain. Doing so will allow you to explore the depths of Sekhem Hall farther and even loot two Precious Chests and one Luxurious Chest by solving a small puzzle.

How to drain the water in Sekhem Hall in Genshin Impact