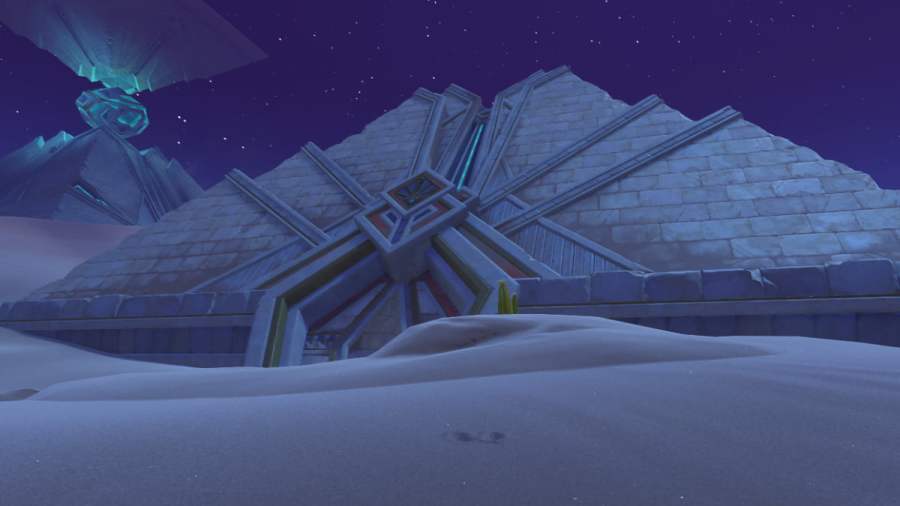 Desert's Remembrance is a Genshin Impact World Quest in the Old Notes and New Friends questline. You and Paimon must solve a confusing puzzle in the Dune of Carouses by switching between red and blue.

To unlock this World Quest, you must complete the first part of the quest chain called Dual Evidence. Once that's done, head to Aaru Village and speak with Soheil, who will give you four World Quests, including Desert's Remembrance.

Related: Who is the Pyro Archon in Genshin Impact? Everything to know about Murata

This quest involves three rooms: the room with a switch, the red room, and the blue room. You'll need to go back and forth between these three rooms, so read the walkthrough below carefully to avoid getting confused.

Start by following the quest marker to the Dune of Carouses and enter the pyramid. Once inside, keep moving forward until you find a room with a switch, which must be colored red. Don't touch it and plunge down the hole in front of the switch to enter a room that we'll call the red room.

You'll immediately spot two Primal Constructs—defeat them so that they don't bother you later on, although this part is optional. Once that's done, look to your left, where you'll find an entrance leading to another room. Rotate the cell twice or until the Primal Beam appears, then go back and return to the room with the switch.

Related: How to get the Vamadha-Go-Round Sumeru hidden Achievement in Genshin Impact

Interact with the switch to change its color to blue. Then turn right to enter another room, which we'll call the blue room.

You'll spot a puzzle as soon as you enter, but it can be ignored as it's not relevant to the quest. Keep following the path, which will lead you down the stairs toward a room with a locked mechanism. Pick up a Forged Primal Light (blue pyramid) and place it on the platform on the right to summon a Cell that you must ignore. Once that's done, return to the room with a switch.

Interact with the switch so that it turns red, then plunge down to the red room.

Like before, turn left and enter the door, and continue forward until you're back to the room with a Primal Beam. You must go to the other end of the Primal Beam and touch the Cell circled in the image above. This will unlock the mechanism at the center of the room. Interact with the mechanism to disperse an invisible barrier. After that, you must return to the room with a switch.

Look up to find your next destination. Wait for the sand current to turn on and use it to propel you to the upper floor, where you'll find an Exquisite Chest. You must loot it to obtain the Quest Item called the Record of the Tomb of Carouses. Bring it back to Soleil in Aaru Village to complete the World Quest.

Check out our guide on How to unlock the Altar of Mirages Domain in Sumeru in Genshin Impact to surface a Domain hidden beneath the sand.