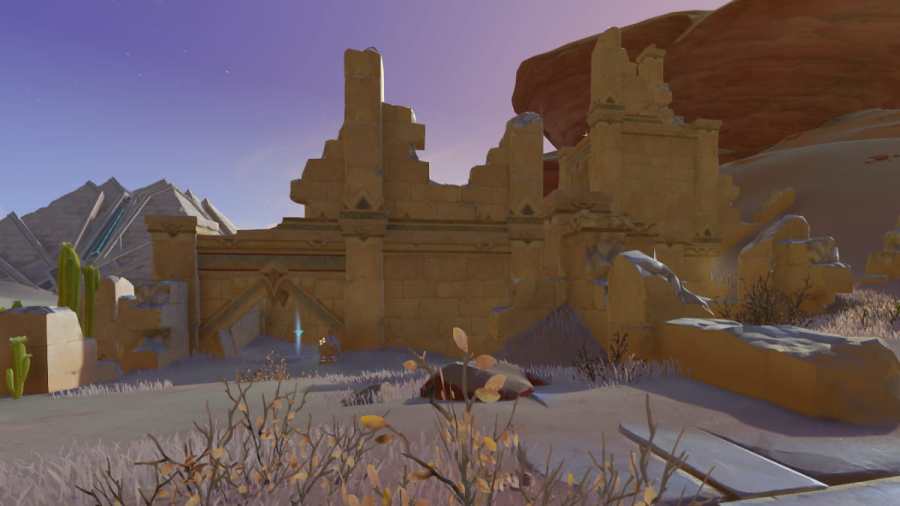 Invisible Barrier is a Genshin Impact World Quest in the Old Notes and New Friends questline. You and Paimon must find ways to get around invisible barriers to explore damaged buildings in the Hypostyle Desert and bring your findings back to Soheil.

To unlock this World Quest, you must complete the first part of the quest chain called Dual Evidence. Once that's done, head to Aaru Village and speak with Soheil, who will give you four World Quests, including Invisible Barrier.

How to Search the Transparent Ruins in Genshin Impact

The main objective of this World Quest is to search through four Transparent Ruins marked on the World Map. You can do them in any order.

Head to the quest area north of Khemenu Temple via the nearby Statue of The Seven. Defeat the Primal Construct guarding the entrance to unlock the mechanism behind it. Then activate the mechanism to open the gate behind.

Pick up the Forged Primal Light and place it on the nearby platform to spawn a Verity Cell. Interact with it to prompt a yellow diamond to appear on top of your head, which will allow you to see invisible walls while active.

Turn right to find an entrance and climb up the stairs. Circle around the area until you find an entrance to another room. Upon entering, plunge down the small crevice at the corner to find a Primal Construct, which you can defeat if you want (although optional). Turn left to find a mechanism that you can ignore. To the left of the mechanism is an Exquisite Chest, which you need to loot to obtain the Quest Item called the Transparent Ruins Record (I).

Related: How to unlock the Altar of Mirages Domain in Sumeru in Genshin Impact

Head to the quest area west of The Dune of Carouses, and keep in mind that it is above ground. Once you're there, climb the stairs to find two platforms for a Replicator Keystone puzzle.

Place the Forged Primal Light on the platform closer to the edge to summon a device. Interact with the device twice so that it rotates twice and forms a Primal Beam. Doing so will prompt the gate at the other side of the room to open. Next, you must enter the gate. You can walk toward it freely as there's an invisible barrier making the ground look like a pit.

Upon entering the gate, you'll immediately spot a mechanism, which you can ignore as it's not relevant to the quest. Instead, look to your right and loot the Exquisite Chest to get the Transparent Ruins Record (III).

Head to the quest area south of Khemenu Temple, and keep in mind that it is above ground. Head to the western part of the building (based on the mini-map) and enter the small crevice housing a Forged Primal Light. Pick it up and place it on the nearby platform to summon a Verity Cell. Touch the Verity Cell to prompt a yellow diamond to appear on top of your head, which will allow you to see the invisible walls when you get close enough.

From the platform, turn left to find an intersection, then turn left again to find a Loose Sand Pile. Use Anemo to disperse the sand and reveal a mechanism that you must interact with to open a nearby gate.

Assuming you're facing the mechanism, look behind you to find the open gate, where the arrow is pointing to in the image above. Enter it to find an Exquisite Chest, which you need to loot to complete the quest objective.

Head to the quest area south of The Mausoleum of King Deshret, and keep in mind that it is above ground. Head to the northeast part of the building (based on the mini-map) and enter the open gate. Once inside, you need to snake around the walls as there are a lot of invisible barriers. Keep going forward until you see the end of the wall, then turn left and head toward the cactus, and turn right to find a Replicator Keystone puzzle.

You need to snake around the barriers again to get to the Forged Primal Light. Head toward the edge of the room (toward the platform), go straight ahead, then turn left to reach the blue pyramid. Once you pick it up, place it on the platform to summon a device, which will automatically connect to form a Primal Beam. A nearby gate will open—enter it to loot an Exquisite Chest containing a Quest Item called the Transparent Ruins Record (II).

Completing all four puzzles will merit you the Wonders of the World Achievement called The King of Four Lands. Don't forget to return to Soheil to turn in your progress and complete the World Quest.