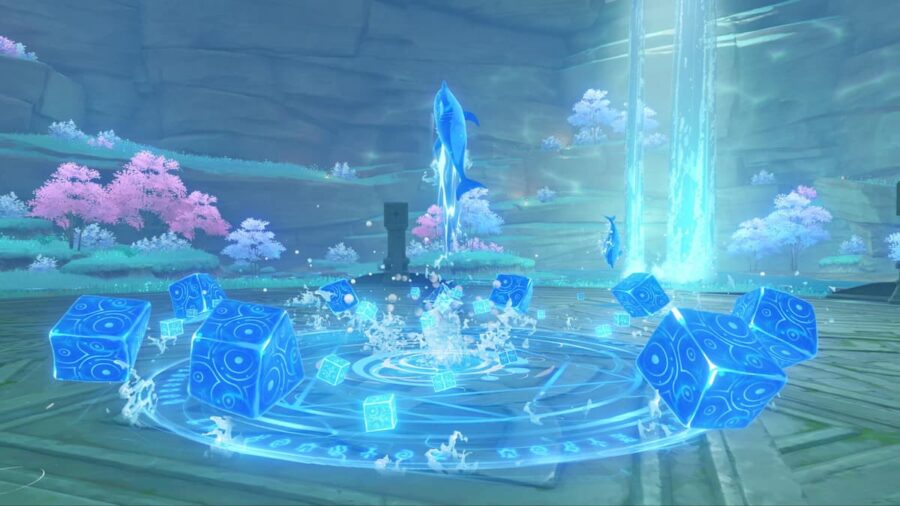 Dew of Repudiation is a Four-Star material in Genshin Impact. It can only be obtained by defeating Level 36+ Hydro Hypostasis located on Watatsumi island, at Suigetsu Pool.

On World Level 0, Level 36 is the starting level of this boss, but on World Levels higher, you will get all previous tier rewards. To collect the battle rewards, you must spend 40 Original Resin. If you have Condensed Resin, you can claim two sets of rewards instead of one.

Hydro Hypostasis is a normal boss, so these respawn upon leaving the area for a few minutes, teleporting, or logging out of the game. Meaning you can acquire several Dew of Repudiation depending on how much Original Resin you have.

Related: How to farm Spectral Husk, Heart, and Nucleus in Genshin Impact

A strange water droplet left behind by the collapse of the Hydro Hypostasis.

It has strong rejection properties, and this forms the basis of one of the Hydro Hypostasis' attack patterns as well. They say that water contains memories and willpower, and that these things can grow when bodies of water meld together. However, the waves conjured by the Hydro Hypostasis are incompatible with the currents that flow above and below ground. Even if it were to flow into the surpassingly pure waters of Petrichor, this drop of water will likely resist assimilation as strongly as mercury.

Can you play Genshin Impact on PlayStation and Xbox?