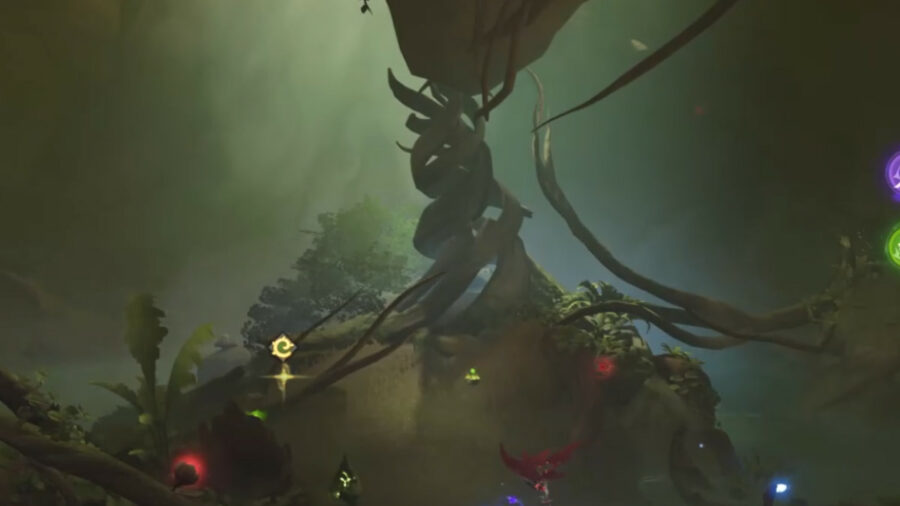 The Rhythm that Nurtures the Sprout is a Sumeru World Quest part of the Aranyaka: Part II - Dream Nursery World Questline. One of the objectives of this quest is to get rid of the Withering inside a hidden tunnel in the Yasna Monument. After observing the Sumeru Roses find the hidden song, you can begin this part.

How to find the Withering Zone in The Rhythm that Nurtures the Sprout in Genshin Impact – Aranyaka: Part II

Unlock the road ahead using the Rhythm of the Sprout

Follow the quest marker toward the edge of a cliff in the Yasna Monument. Stand in front of the empty Sprouting Branch, then use the Vintage Lyre to play the Rhythm of the Sprout (do > so > so > la > ti on the third row). Once that's done, Dendrograna will appear inside the Branch. Interact with it to summon Healthy Dendrograna.

While the Healthy Dendrograna are floating around you, use a Charged Shot to shoot the projectile behind the Branch, which will open up an entrance that leads underground.

Clean up the Withering Zone

Once inside the cave, follow the path forward and jump down the underground river. You will find the first Waverider Waypoint. Interact with it to unlock, then interact with it a second time to summon a Waverider. Use the Waverider to traverse the narrow river—you can ignore all the enemies in the way.

Once you get to the top of the waterfall, exit the Waverider and jump down. You'll find the second Waverider Waypoint. Like before, unlock it and summon a Waverider to continue crossing the narrow river.

You'll eventually reach the Withering Zone, which you can get rid of normally without any special tricks. Once that's done, you'll be rewarded with a Precious Chest.

Check out our guide on Genshin Impact The Rhythm that Nurtures the Sprout World Quest Vasara Tree Dream Domain guide to help you in the next segment of this quest.