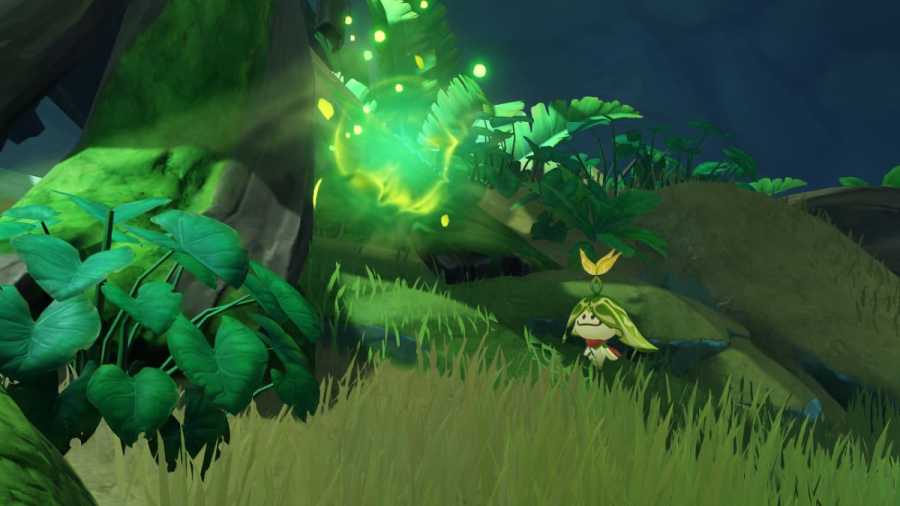 The Rhythm that Leads to a Gloomy Path is a Sumeru World Quest that’s part of the Aranyaka: Part II - Dream Nursery World Questline. After getting rid of the Withering inside the underground tunnel in Yasna Monument, you’ll be asked to investigate the trees inside Ashvattha’s Concourse. Arama will then prompt you to enter the Vasara Tree’s dream to find the Vasoma Fruit.

Before starting, prepare a battle-ready team with at least one bow user. Then interact with the glowing spot at the tree's base to prompt a dialogue with Arama, who'll ask you if you're ready to enter the Vasara Tree's dream. Respond with (Reach your hand to the Vasara Tree...) to enter the Domain.

Once inside, defeat all the fungi to disperse the barrier blocking the colorful mushroom. Once that's done, interact with the mushroom to open up the path leading further into the Domain. Follow the path forward to find a Dendrograna shooting puzzle. Summon Dendrograna and shoot the floating projectile with a Charged shot to spawn one more, then shoot the second one to spawn three more.

However, this time, you need to play the Rhythm of the Sprout (do > so > so > la > ti on the third row) in front of the empty Sprouting Branch to make it produce Healthy Dendrograna. Then summon Healthy Dendrograna and hit the floating projectile at the center to disperse the barrier underneath, revealing a platform with a swirl pattern.

Step onto the platform, which acts as an elevator that will take you to the center of the giant flower above. Once inside, enemies will spawn. Defeat the enemies to complete the Domain. After exiting, interact with the green glow beside Arama to pick up the Vasoma Fruit and complete the World Quest.

Check out our guide on How to unlock the underwater Teleport Waypoint in Sumeru in Genshin Impact to explore more of the nation of wisdom.