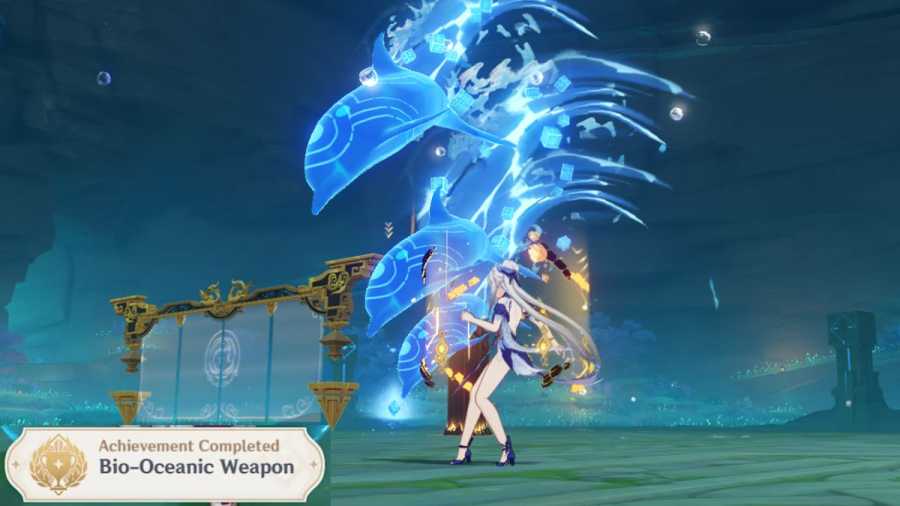 Bio-Oceanic Weapon is a Genshin Impact Wonders of the World Achievement that can be obtained by getting hit by a certain animal created by the Hydro Hypostasis. To get it, you must first have access to the Hydro Hypostasis' cave near Suigetsu Pool on Watatsumi Island. The boss will fire out a series of attacks, one of which will grant you this Achievement.

Upon engaging in battle with the Hydro Hypostasis, it will begin attacking you with a series of different skills. One of those skills involves a "dolphin dive," where the boss will summon a pod of dolphins to attack you.

Related: How to get The Fraught Return Achievement in Genshin Impact

The dolphins will emerge from the ground and dive headfirst toward you. Your goal is to get hit by this attack. You can activate a shield to not take damage and still complete the objective. If you accidentally dodge the attack, don't worry as the Hydro Hypostasis will repeat it a couple of times throughout the battle. But you may have to stall the boss by not defeating it immediately until it releases the attack again. Once you get hit by this attack, you'll unlock the Hidden Achievement called Bio-Oceanic Weapon.

Check out our guide on How to get the Dry Clean Hidden Achievement in Genshin Impact here on Pro Game Guides to unlock another Hydro Hypostasis Achievement.