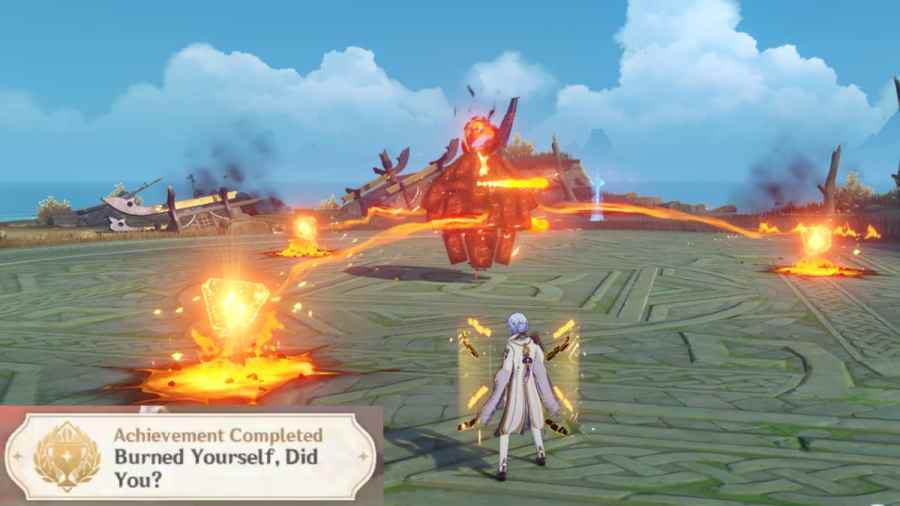 Burned Yourself, Didn't You? is a Genshin Impact Wonders of the World Achievement that can be obtained by defeating a Pyro Hypostasis that has reignited twice. Start by heading to the clearing that houses the Pyro Hypostasis north of Inazuma's Kujou Encampment to meet the boss. You need to bring at least one character that can break Pyro shields, preferably a fast Hydro applicator like Ayato, Barbara, Childe, or Kokomi.

The Pyro Hypostasis has a strong Pyro shield that you need to break before you can begin attacking its core, which is the only way to decrease its HP. Keep applying Hydro while the boss barrages you with a series of attacks. Once its shield breaks, the boss' core will be exposed. Decrease its HP using your DPS unit.

Related: How to get the Dry Clean Hidden Achievement in Genshin Impact

Once its HP is low enough, three Tinders will appear. You typically need to break them using Elemental Reactions to prevent the boss from reviving. But to get the Achievement, you must ignore these Tinders and let them revive the Pyro Hypostasis.

Once the Pyro Hypostasis is revived, its shield will fully recover, so you have to break it again. Follow the same steps and let the Tinders revive the boss a second time. After the second revival, defeat the boss to get the Burned Yourself, Did You? Hidden Achievement.

Check out our guide on How to get the Bio-Oceanic Weapon Hidden Achievement in Genshin Impact here on Pro Game Guides to complete another Hypostasis Achievement.

How to get the Burned Yourself, Did You? Hidden Achievement in Genshin Impact