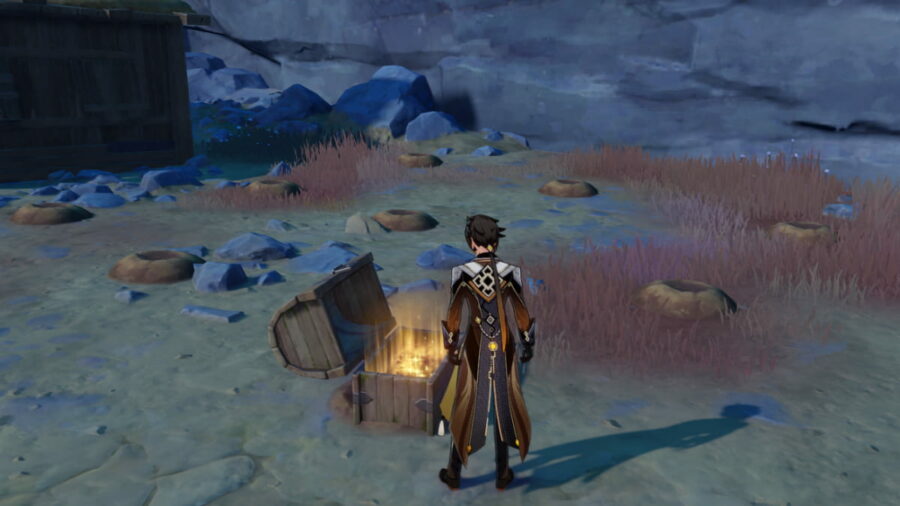 Old Chou's mini-game allows you to dig up three Chests in the plot of land beside his house, which is located below the Cinnabar Cliff in The Chasm. You can unlock this puzzle after completing the World Quest called A Cliff-Side Hero's Past.

After completing the prerequisite, head to the location circled in the image below to find Old Chou. Speak to him and select Start digging.

The digging game is inspired by Minesweeper, with identical mechanics. The game can be played with a strategy or randomly and will end when you dig up an Explosive Barrel or all three Chests, but you can always try again one real-time day later.

When digging through the burrows beside Old Chou's house, there are five possible outcomes. You can dig up Cabbage, Iron Chunk, an empty hole, an Explosive Barrel, or a Chest. It's highly recommended not to pick up Cabbages and Iron Chunks after digging, as they will serve as guidelines for the rest of the game.

Related: How to unlock and complete the Hydrological Investigation in The Chasm World Quest in Genshin Impact

Consider that the item you've dug up is in the position represented by the Cabbage above. You can assume the following:

Like classic Minesweeper, diagonals are not considered in this game.

You can get up to three Chests from this game: a Common Chest, an Exquisite Chest, and a Precious Chest. However, the locations of the Chests differ for each player. If you fail to complete the game the first time, Old Chou will prompt you to come back at least one real-time day later to try again. After getting all three Chests, you'll unlock the Wonders of the World Achievement called Ding Ding Ding, We Have a Winner! Again!

Check out our guide on How to complete The Chasm’s Bounty World Quest in Genshin Impact to discover secrets hidden beneath The Chasm.