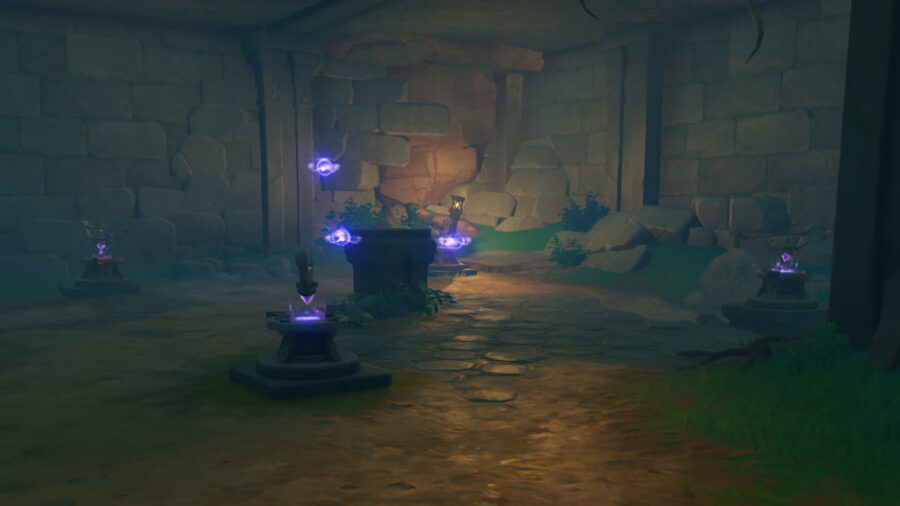 Inazuma's Lightning Strike Probes are some of the most confusing puzzles to solve in the game, especially when they're coupled with unpredictable sources of Electro, such as Seelies. You'll find one such puzzle in Shirikoro Peak's underground ruin.

To locate the puzzle, go to Shirikoro Peak and jump down until you reach the underground ruin. Once inside, turn left until you see the stairway leading down to the watery area. The path beyond the water will be blocked until you destroy the wall with a Thunderbird carving using the Peculiar Pinion Gadget. When the wall is broken, follow the path inside to find four Lightning Strike Probes and three Electro Seelies.

There are a few ways you can solve this puzzle, but following the directions below exactly as prescribed will ensure that you complete it. If you make a mistake mid-way, the solution below may no longer work. In that case, you can reset the puzzle by teleporting away and coming back to the area after a few minutes or by relogging.

Related: How to complete The Sun-Wheel and Mt. Kanna World Quest in Genshin Impact

Carefully follow the steps below to complete the first part of the puzzle.

From here onward, you should not touch any Seelie aside from Seelie #2.

At this point, three out of four Lightning Strike Probes should be activated. You can tell they're activated by the purple glow surrounding them. The last inactive Probe is circled in the image above. You need to use a little bit of Electro to force it to face left and complete the puzzle.

To activate the final Probe, approach the nearby Seelie but do not touch it. When you get near the Seelie, it will release a dose of Electro, which you need to control the Probe. Once you're hit by the Seelie's Electro, step in front of the last Lightning Strike Probe until it locks, completing the puzzle. You'll be rewarded with a Precious Chest for your effort.

Check out our guide on How to solve all Tsurumi Island Stone Slate Ishine Script puzzles in Genshin Impact to complete your area exploration.