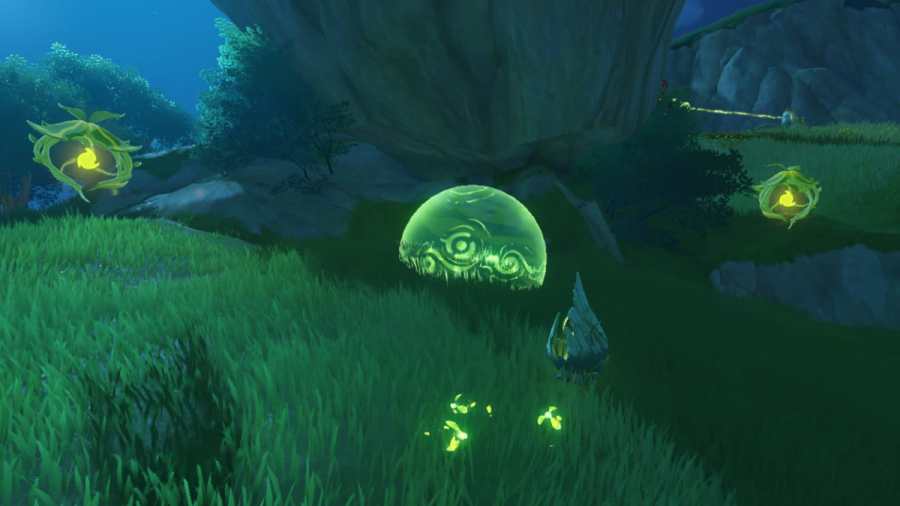 While exploring the cliffs surrounding Genshin Impact's Mawtiyima Forest, you'll encounter a suspicious Dendro Rock that, when broken, will reveal a hidden Dendro Barrier. Solving the puzzle will reward you with a Luxurious Chest.

Start by heading to the puzzle location circled in the image below. The easiest way to get there is by teleporting to the Statue of The Seven south of Mawtiyima Forest. From the Statue of The Seven, climb the cliff lined with Stamina-restoring flowers. Then climb another cliff also lined by Stamina-restoring flowers. From that point, you can easily head toward the Dendro Rock pictured below.

Interact with the Auspicious Branch to summon Dendrograna. Then use any character (bow users are easiest) to hit the Dendro Rock using a Charged Attack. The first rock will break, revealing a smaller Dendro Rock. While the Dendrograna is still active, attack the smaller rock with a Charged Attack as well to reveal the hidden Dendro Barrier.

Related: How to get the They Enter the Flow Sumeru Hidden Achievement in Genshin Impact

Next, summon Dendrograna again and switch to a bow user. Shoot the floating projectiles in any order to make the Dendro Barrier disperse. This will reveal a Mint plant. You must interact with the Mint to reveal a Pyro Whopperflower. Defeat the enemy to prompt Four-Leaf Sigils to appear.

Use the Four-Leaf Sigils to head to the other side of Mawtiyima Forest, where you'll find a tree housing a Seed Mirror. Below it, a Luxurious Chest will spawn for you to loot.

Check out our guide on Where to find all Illusion Murals in Genshin Impact – Beyond the Shadow of Time Achievement here on Pro Game Guides to solve more hidden puzzles in the game.