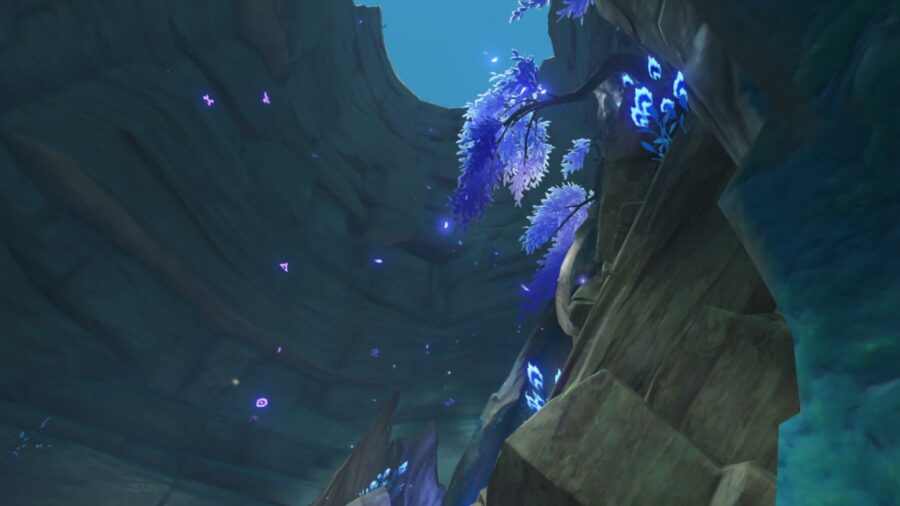 In the depths of Mt. Kanna, players will find Ishine Script symbols embedded inside the mountain's walls. These are all part of a standalone puzzle that requires the Peculiar Pinion Gadget to solve. You can obtain this Gadget by completing the Octave of the Maushiro World Quest.

Start by heading to the entrance of the cave at the top of Mt. Kanna—its exact location is marked up on the map below.

Related: How to complete the Octave of the Maushiro World Quest in Genshin Impact

You may notice that only four symbols are glowing. These indicate the symbols that you need to touch on the walls enclosing the cave.

Interact with the Thunder Sakura Bough to pick up an Electrograna to help you maneuver across the cave. Once you find a symbol that matches the glowing ones on the wall behind the Thunderbird Statue, Touch the symbol to prompt it to glow.

The symbols are lined up in a nearly straight line, so you simply have to fly to the first and work your way downward, which will follow this pattern: fork, Seelie, triangle, and circle. You can touch the symbols in any order.

After touching all four symbols, a Precious Chest will appear, completing the puzzle.

How to complete “A Nourishing Friendship” achievement in Genshin Impact