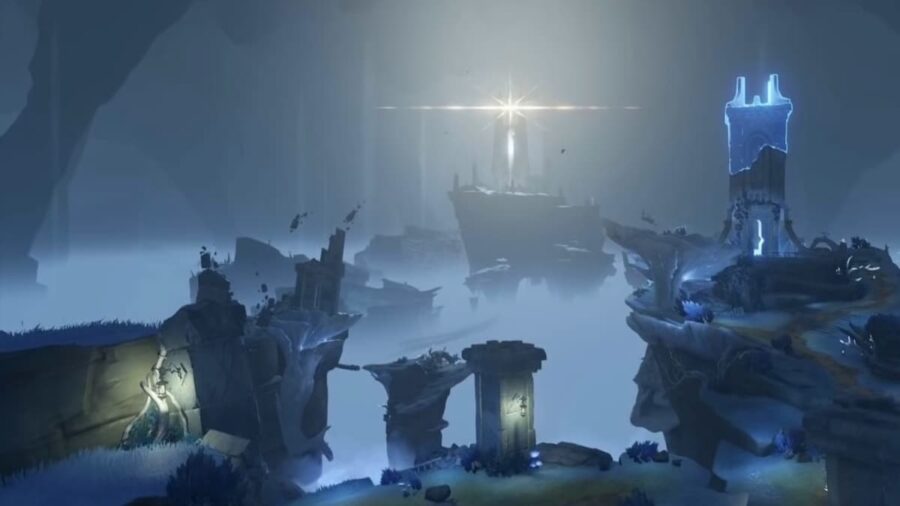 Enkanomiya is a settlement that fell deep beneath the waves of Inazuma long ago, covered by a blanket of perpetual darkness. The sun's warm rays do not reach this place like the rest of Teyvat, leaving it a cold and isolated pocket of land.

At first, the residents of Enkanomiya tried desperately to adapt to this strange and dark environment, finding little success but ultimately surviving each day to see the next. They were not the only beings living in the depths, though—the Dragonheir of the Depths soon began to terrorize the humans residing in its domain.

To protect his people, Abe Yoshihisa created an artificial light source capable of deterring the Dragonheir of the Depths—the Dainichi Mikoshi. The light emitted by this construct wasn't powerful enough to protect Enkanomiya entirely, however, and its residents still struggled to survive the harsh landscape. The great serpent Orobashi visited Enkanomiya at some point after the Archon War, taking pity on their situation and slaying the Dragonheir of the Depths.

Related: What is the Dainichi Mikoshi in Genshin Impact?

Orobashi acted as the guardian of Enkanomiya for a time, gifting Abe Yoshihisa pieces of mystical coral from its body. These pieces of coral were capable of imbuing the Dainichi Mikoshi with an impressive amount of energy, allowing it to act somewhat like a makeshift sun and emulate the day-night cycle of Teyvat.

The day time would be called Whitenight, while the night would be known as Evernight. This cycle could be controlled at will by using certain constructs found around the land, finally allowing the people of Enkanomiya a chance at peace.

Enkanomiya's environment will appear differently depending on which cycle it's currently in, and players will need to switch between Whitenight and Evernight to unlock new areas and puzzles. As players explore Enkanomiya and complete their story quests, they will eventually receive a useful item called the Golden Bridle of Enkanomiya. This tool can be used to control the day-night cycle by interacting with the ancient constructs around the area, and mastering its usage will be important to uncover the mysteries surrounding Enkanomiya.

Enkanomiya is set to release with Genshin Impact's 2.4 Update, so be sure to check back in here at Pro Game Guides for future updates! Looking for more great Genshin Impact content? Check out How to install Live Genshin Impact Wallpapers on your PC.

How to switch between Evernight and Whitenight in Enkanomiya