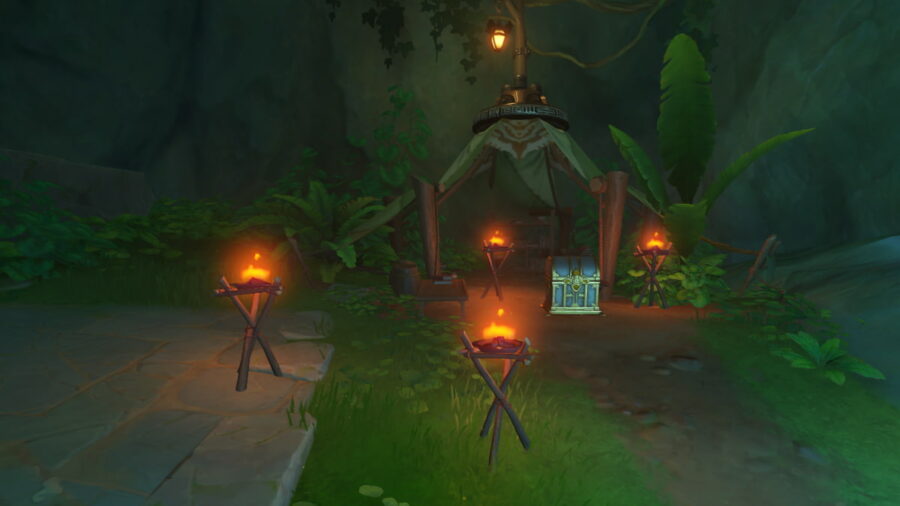 The Strange Parchment is a Quest Item that you'll get after completing the World Quest called Royinjan's Chapter: Linga in the Vimana Agama questline. Upon reading it, you'll find a map that marks the locations of a few checkpoints, as well as the final treasure. Solving this puzzle will merit you a plethora of rewards, including a coveted Luxurious Chest.

To solve the Strange Parchment puzzle, you must complete the objectives in each checkpoint laid out on the map. They need to be completed in the exact order based on the guidelines below.

Start by heading to the area circled in the image above by gliding from the nearby Statue of The Seven. Do not use the Teleport Waypoint as it will take you underground, whereas this puzzle starts above ground.

You will encounter a Time Trial Challenge that requires you to collect eight Anemo Particles within a time limit. Complete it to obtain a Common Chest. After looting the Chest, the Strange Parchment will transform into an Unsealed Parchment.

Related: How to find the bad guys hiding in Vimara Village in Genshin Impact

Next, head to the area circled in the image above to find the second Time Trial Challenge, where you need to defeat three Ruin Scouts within one minute. After completing the Challenge, you'll be rewarded with a Remarkable Chest. After looting it, you'll obtain a Furnishing Blueprint, and the Unsealed Parchment will transform into a Guiding Parchment.

Before heading to the next area, you first need to prepare Sugardew Bait—the Recipe can be purchased from the Sumeru Fishing Association. You can craft x10 Sugardew Bait using x1 Harra Fruit and x1 Sumeru Rose from any Crafting Table. If you're low on these materials, you can purchase them from the General Goods shop in front of the Blacksmith in Sumeru City.

Head to the area circled in the image above. You can get there by teleporting to the nearby Teleport Waypoint (do not use the Statue of The Seven) and jumping down. You need to light up the four torches using any Pyro character in the exact order prescribed in the image above. After doing so, a Luxurious Chest will spawn. After looting it, the Whispering Parchment will transform into a Mysterious Parchment. You'll also unlock the Wonders of the World Achievement called Call of the Nameless City.

Check out our Genshin Impact Until Vana is Healed World Quest guide to complete another sequel to Aranyaka.