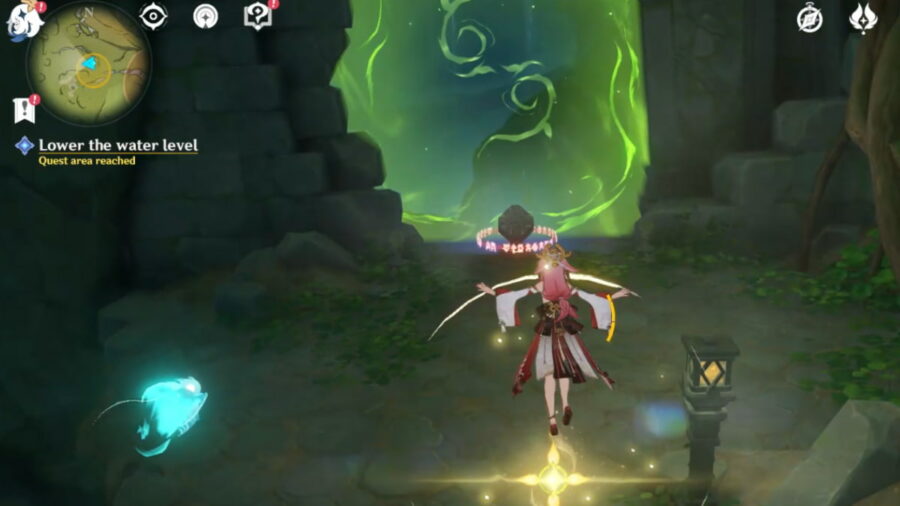 Royinjan's Chapter: Linga is a World Quest that branches out from another quest called Vimana Agama: Royinjan's Chapter. While it's positioned as a quest, the objective involves finding one of the mechanical components required to complete the overarching Royinjan Chapter.

To unlock Rojinyan's Chapter: Linga, you first need to complete the first two parts of the Vimana Agama questline:

Toward the end of Royinjan's Chapter, you will unlock two branches called Linga and Yoni, which can be done in any order.

Follow the quest marker to the cave east of Devantaka Mountain. You'll immediately spot a Seelie, which you must follow, as it's part of a puzzle to disperse a barrier later on. Keep following the Seelie and use the Four-Leaf Sigils to help you traverse the area. Once you see the green barrier, you'll notice an entrance below it.

The first Seelie will fly up to the barrier, so from the position demonstrated in the image above, glide directly toward the entrance the arrow is pointing to, where you will find the second Seelie. You must follow this second Seelie, as it's also part of the barrier-dispersing puzzle. It will lead you to a nearby platform with a Bouncy Mushroom and then fly upward.

Once both Seelies have been guided to their Courts, an Exquisite Chest will appear. The barrier will also disperse, and the mechanism will unlock. Interact with the mechanism to drain the water level. After that, jump down into the water and swim toward the direction of the quest marker.

You'll find yourself in front of a blocked path. Equip the Vintage Lyre and play the Rhythm of Vamadha (fa > mi > mi > re > do on the first line), then attack the blockage to open up a path. Once inside, you need to solve a Dendro Monument puzzle. Keep in mind that there are two Ruin Sentinels that you may want to defeat so that they don't bother you.

First, you need to summon Dendrograna via the nearby Auspicious Branch, then attack the floating projectiles to unseal the Dendro Monuments. You can follow the green traces to find all three. Once that's done, use Dendrograna or a Dendro applicator to attack each of the Monuments in any order to complete the puzzle. You'll be rewarded with a Luxurious Chest, and the barrier blocking the path forward will also disperse.

Interact with the mechanism to lower the water level. Once that's done, head further into the cave and follow the quest marker to interact with the glowing Investigate spot and complete the World Quest. You'll obtain one mechanical component to count toward the objective in Vimana Agama: Royinjan's Chapter.