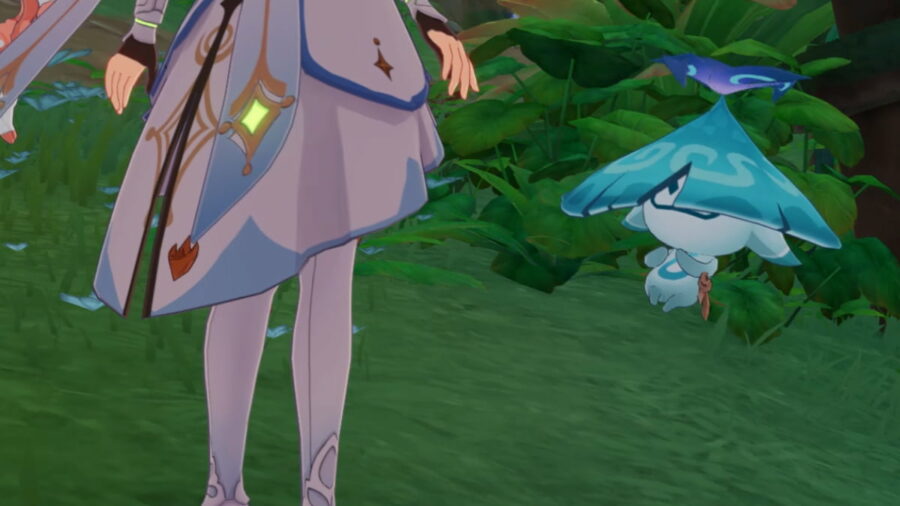 Vimana Agama: First Chapter is the first part of the World Questline of the same name. It starts in Devantaka Mountain, where you meet Ararycan, an Aranara scared of bad humans.

How to unlock the Vimana Agama World Questline in Genshin Impact

To unlock this World Quest, you first need to complete the first quest in the Aranyaka: Part II - Dream Nursery questline called The World of Aranara. This will unlock Vanarana in the northwestern part of Sumeru’s rainforest area and will allow you to switch between the real and dream Vanarana. You will also obtain a Quest Item called the Aranyaka.

Head to the Quest Item section of the Inventory and select the Aranyaka. Click Read to open up a book detailing your journey with the Ararana. On the first tab, select V, and click Go. A blue exclamation mark will immediately appear in the World Map, signaling the location where you can accept the Vimana Agama: First Chapter World Quest, initiating the overarching questline.

How to complete the Vimana Agama World Questline in Genshin Impact

After clicking Go in the Aranyaka, head to the blue exclamation mark in the Devantaka Mountain, where you'll meet an Aranara named Ararycan. After speaking with him, you need to investigate the strange spot a few times.

Follow the highlighted area in the mini-map to find the location of the glowing Investigate spot, which you need to interact with to clear the quest objective. The second glowing spot beside the Ruin Drake will lead you toward a cave, where you must use Four-Leaf Sigils to traverse.

You'll eventually encounter a hidden Teleport Waypoint near the final location of this quest objective. Make sure to activate it to make it easier to return later on. Once that's done, use the Four-Leaf Sigils to head to the nearby quest marker, where you'll find a person named ??? inside a giant Ruin Grader Core. After interacting with him, he'll introduce himself as Jazari.

After speaking with Jazari, head back to the Teleport Waypoint to speak with Ararycan, then return to Jazari via a Four-Leaf Sigil to continue the conversation.

Once that's done, follow the quest marker to Port Ormos, where you'll find an old man named Royinjan. Speak with him to complete the World Quest and immediately initiate the next part of the questline called Vimana Agama: Royinjan's Chapter.