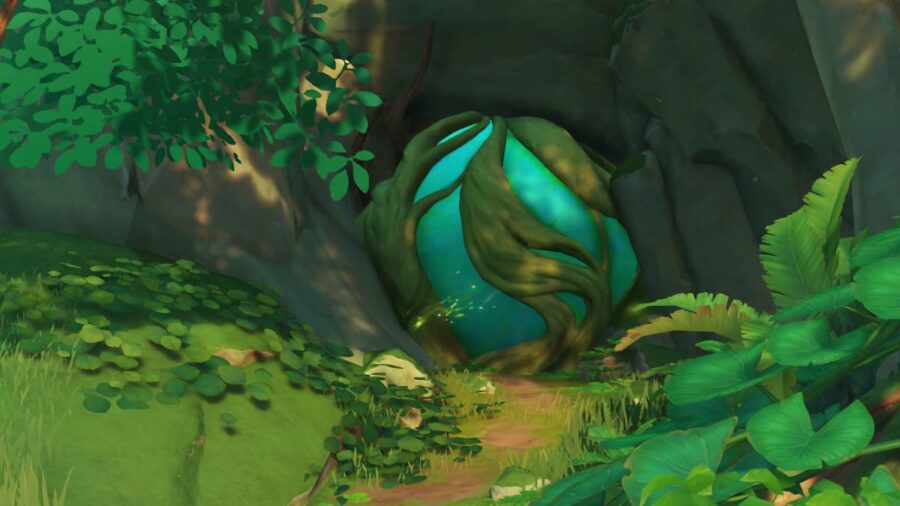 Vimana Agama: Royinjan's Chapter is the second World Quest in the Vimana Agama questline. It follows the story of an old antique dealer named Royinjan, who once built a secret base housing the Amiti Device.

To unlock this World Quest, you must first complete Vimana Agama: First Chapter through the Aranyaka. Once that's done, Vimana Agama: Royinjan's Chapter will automatically unlock.

Follow the quest marker to Vimara Village, where you'll find a glowing spot in front of a blocked cave. After the dialogue, you'll be prompted to play Ararycan's song, the Rhythm of Vamadha to roll the Vamadha out of the way. Equip the Vintage Lyre and follow the game's prompts to play the tune (fa > mi > mi > re > do on the first line), then attack the blockage to open up a path.

After the dialogue, follow the quest marker toward the glowing spot inside the cave, and then you'll be asked to look for two buried items. The quest marker will lead you to glowing Investigate spots that you need to interact with to complete the objectives. Once that's done, you'll be prompted to head back to Vimara Village and speak to an old man named Amadhiah, the same person who had given you the Vintage Lyre in an earlier questline.

After this segment, you'll be asked to search for the mechanical components, which you can do so by completing the two new World Quests that branched out of Royinjan's Chapter in any order:

Once both are done, you'll be prompted to head back to the secret base in Vimara Village to speak with Royinjan. After that segment, you must speak with Jazari to begin the next part of the questline called Vimana Agama: Jazari's Chapter.

Check out our Genshin Impact A Prayer for Rain on the Fecund Land World Quest guide – Varuna Gatha to complete another prerequisite for Festival Utsava.