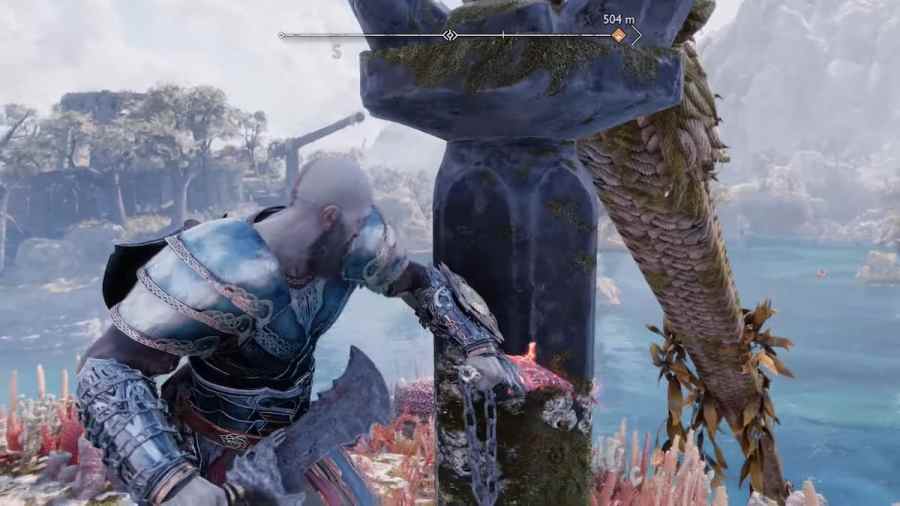 To free Lyngbakr in The Weight of Chains Favor in God of War Ragnarok, head back to Lyngbakr Island after finding the Watchtower Key and banging the drum. Climb up the rocks when on the island to encounter some Draugr at the top to begin.

After the Draugr are dead, the first Lyngbakr binding can be found to your right. Head to the gate, and to the right of that, explode the Red Pot by throwing your axe at it. Progress and cut the first chain biding using your blades, and then throw your axe at the lock that appears.

You can find the second Lyngbakr binding by returning to the area you fought the Draugr, to the right of where you climbed up. Eliminate the enemies here, and then look for a chain opposite the golden rocks on the right side of the wall. Climb it. On your left at the top is another climbing section for an optional area for a chest and a Kvasir poem. If you want to ignore that, from the chain, go left of the Lore Marker, and grapple over to the other side using the hook.

Follow the path, destroy the Draugr, kick down the chain, and slide down to find another binding you can slice with your blades. And another lock to throw your axe at.

Related: How to shut down Modvitnir's Mining Rig for the Favor In Service of Asgard in God of War Ragnarok

To find the third Lyngbakr binding, destroy the Wretch nest that appears to find Fire Bombs. Pick one up and throw it at the golden rocks that explosions can only destroy.

Return to grab Fire Bomb, then jump over the gap the golden rocks were, ignore the chest for now, and head right. Throw the Fire Bomb at the golden rocks opposite to free up a dock for your boat. However, before returning to your boat you can find Odin's Raven and a hidden chest.

To find Odin's Raven on Lyngbaker island, as well as a hidden chest, follow these steps.

Related: How to shut down Althjof's Rig for the Favor In Service of Asgard in God of War Ragnarok

When docked, climb up the rocks, and eliminate all the enemies. The third binding is on your left. But there's a hidden chest underneath golden rocks in front of you.

Climb up on your left, and cut the last binding with your chain. Once done, head left, jump over the gap, and slide down the rope. At the bottom, break the lock with your axe. Open the chest to the right of the rope, remove the wooden barricade with your chain, and kick down the climbing chain on the left as you go through. Slide down the chain, get into the boat, and head towards Lyngbakr's eye for The Weight of Chains Favor being completed.