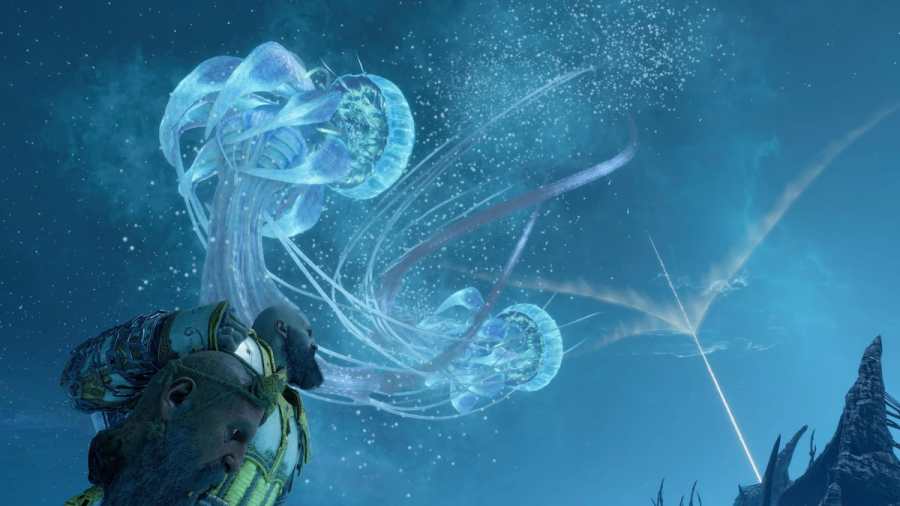 In order to reach the Hafgufa in The Forgotten Sands, players will need to have already freed the first Hafgufa found in The Barrens as part of the Secret of the Sands Favor. Once this prerequisite is done, head northeast from The Barrens and open the gate leading to The Forgotten Sands. The Hafgufa's cave is located in the center of this area, and Kratos' companions will comment when he arrives.

Song of the Sands is a Favor that is obtained as soon as players open the gate leading from The Barren to The Forgotten Sands. In this quest, players are tasked with locating the entrance of the Hafgufa's cave, navigating through its windy paths, freeing the Hafgufa, returning to the surface, and then finally destroying the Hive Cage holding the creature down.

The path to the Hafgufa is fairly straightforward, but there are a couple of things to keep in mind. At several points, while traversing these caves, players will need to ricochet their Leviathan Axe off of Twilights Stones to destroy fleshy tendrils and Root Nodes blocking Kratos' path. There are also walls (right) that open when Atreus or Freya shoots Sonic Arrows at them.

Related: Where to find all Legendary Chests in The Temple of Light in God of War Ragnarok

How to destroy the Hafgufa's Bindings in The Burrows

Upon reaching the Hafgufa, there are specific steps that players will need to follow to free it. Open the wall with the shot of a Sonic Arrow and ricochet Kratos' Leviathan Axe off of the Twilight Stone at the correct angle to destroy the line of Root Nodes on the far left side of the room. Head back over to the far right side of the room and destroy this row of Nodes next. That should leave only the center line of Root Nodes left. Once those are finished, the Hafgufa will be ready to release after arriving back to the surface and breaking the Hive Cage.

How to leave the cave in The Burrows

To exit The Burrows, leave via the right side of the room to find a Legendary Chest. This will cause you to be attacked by enemies. Dispatch them all to open the chest and acquire the artifact next to it. Climb the path next to the chest and head on up. After climbing/grappling, you'll eventually encounter some Twilight Ore. Aim at the ore to the left to solve this mini puzzle.

Continue climbing, and open the red chest. Turn around and throw your axe at the left paddle above the Twilight Ore on a chain. Then aim at the left ore to progress. Grapple onto the new point and continue to climb, then grapple yourself through the stone slab. Defeat the powerful Light Elf at the top, then leave through the entrance.

How to open the Hive Cage in the Forbidden Sands

Upon exiting The Burrows, players will need to round the corner and walk a short distance to find the Hive Cage shown above. When Kratos is within range, interact with the Hive Cage and cut it loose by repeatedly tapping the button prompt. After the Hafgufa is set free, it will join its partner in the skies.