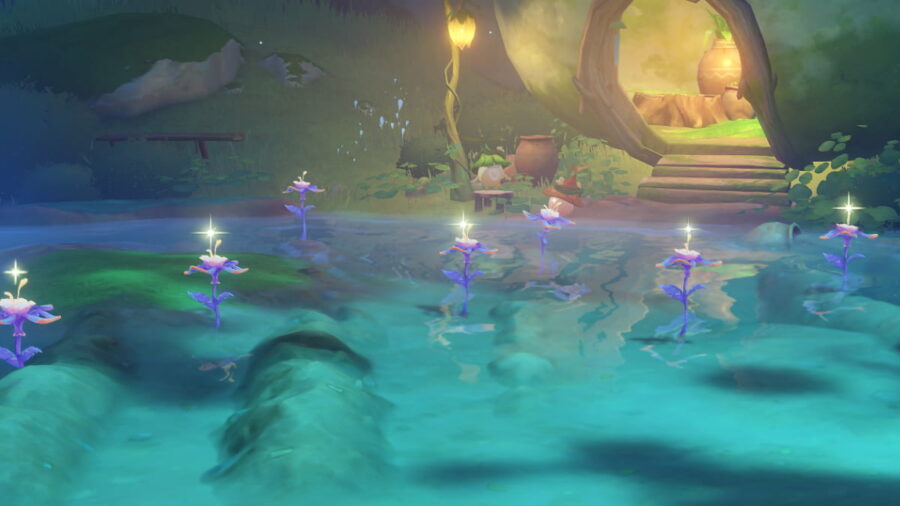 After completing the Varuna Gatha questline, you'll unlock a World Quest called Sprouting Seedlings, which will prompt you to visit Aranakula's garden in Vanarana. He'll tell you about Vasmrtis, which are seeds that can be used to grow healthy Viparyas. After collecting all 12 Vasmrtis by solving nursery puzzles, here's what you need to do with them to unlock a World Quest that will complete the Varuna Gatha segment in the Aranyaka book.

What are Vasmrtis used for in Genshin Impact?

After collecting 12 Vasmrtis, switch to Vanarana's dream form. This segment will not work if you're in the real Vanarana, so make sure to switch before heading to the quest area. Once you're ready, head to the area circled in the image below and enter the cave to find an intersection. Turn right to find Aranakula's garden.

Next, you need to place one Vasmrti in each of the burrows. There are 12 in total, and you can place them in any order. Each Vasmrti will turn into a seedling.

After placing all the Vasmrtis in the soil, wait one real-time day or until the server resets, and return to the garden. You'll find that all the seedlings have bloomed into Viparyas. Approach the two Aranara to prompt dialogue and complete the objective. You'll unlock the Wonders of the World Achievement called When the Dreams Bloom. A Dendroculus will spawn inside the Aranara house, and you can proceed with completing the final World Quests that acts as a sequel to Varuna Gatha.

Check out our guide on All 8 Eremite camp locations in Sumeru in Genshin Impact to complete another Hidden Exploration Objective.

How to use Vasmrti in Genshin Impact