Our Saviors of Uldum Control Taunt Warrior Deck Guide features a detailed look at the best deck list for this popular archetype. This deck seeks to utilize some new Taunt based synergies from the new expansion to wall of our opponent and buff up our minions.

Taunt Warrior has been played with before in the past, it was originally messed around with when Bolster came out. It did not fare too well at the time, so I'm not totally confident in another attempt at it. This deck also seeks to utilize the hand buff mechanic, which again had been utilized previously, but met with poor results. So, while optimism isn't super high for this type of deck, it did get some potentially powerful cards that might be able to push it over the hump.

The deck has morphed quickly into mostly a Control Warrior with some of the strong cards from the Saviors of Uldum expansion being added into it. There is some Taunt synergy here, so I still feel okay calling it a Taunt Warrior of sorts.

This style of deck is largely just about stalling out the board as much as possible early on. We use our early game minions to hold onto the board, and cards like Town Crier and Frightened Flunky get us additional resources to work with for future turns. If our opponent starts to takeover in the mid-game, we have AOE like Warpath , Dyn-o-matic , and Brawl to stop them from getting too far ahead. We've also got Plague of Wrath which can help us get rid of higher health boards.

Restless Mummy is a new addition to the deck, and it trades well because of the Rush and then respawns via the Reborn mechanic. This forces our opponent to have to trade into it or potentially lose another minion.

Once we get later into the game, try to use that Armagedillo to hit some of your Taunt minions. Tomb Warden and Zilliax in particular are the cards we'd love to be able to hit with the buff.

Archivist Elysiana is one of the ultimate late game resource generators. If you stall your opponent into what is going to look like a fatigue battle, then this card will give you the ability to gain additional cards that should help you finish the game. Not only do you get ten cards in your deck, you get to choose which ones you get via the Discover mechanic!

The Power of the Mad Genius 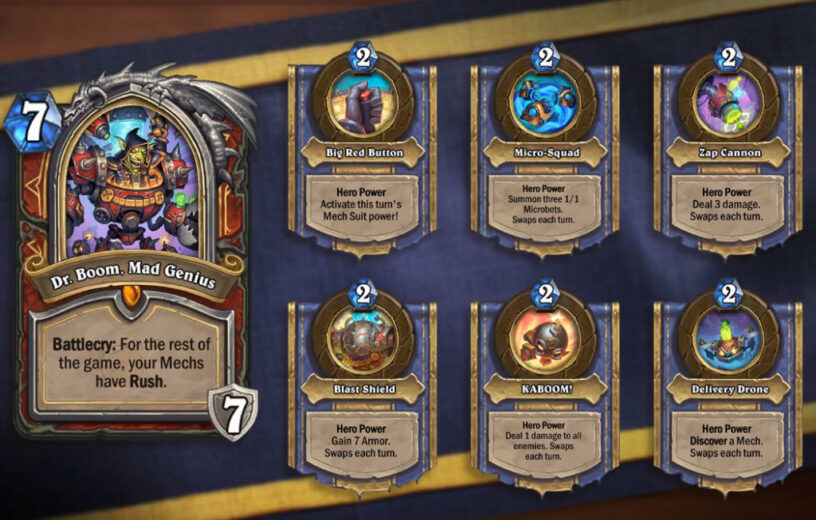 Last but not least, we've got the powerful Dr. Boom, Mad Genius to help seal up the game for us. Our deck does have some Mechs in it, so we're getting the buff from that, but we're obviously looking to get value out of the hero powers. Delivery Drone in particular is great for us because we can get additional resources to work with.