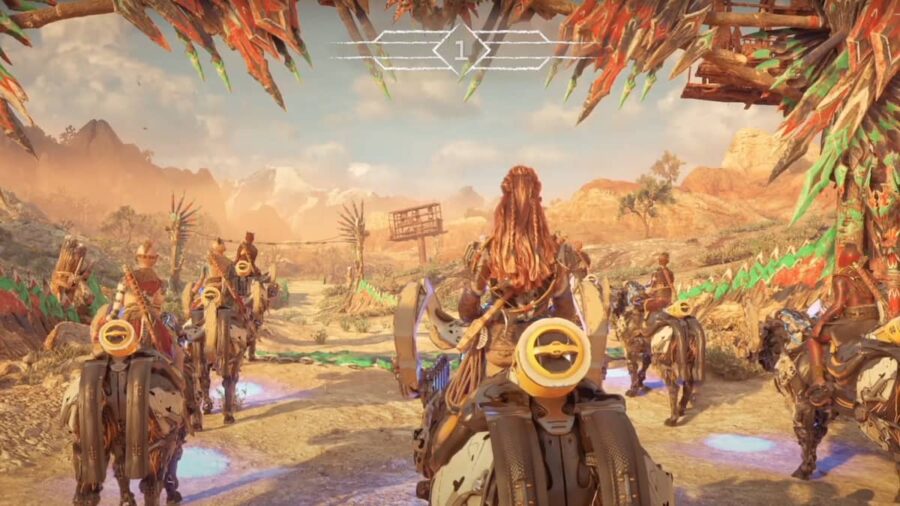 Gauntlet Runs are one of the several competitions that players can join in Horizon Forbidden West. They are a type of race where Aloy will have to traverse obstacles and use the knowledge she's gained in her combat and problem-solving in order to reach the end before anyone else. There are four Gauntlet Runs in total within the game and we'll go over each one.

Between Scalding Spear and the Base, players can find this first Gauntlet Run. Out of all the runs, this one can be buggy if not done when it is found, as it will not direct players to the proper location to start the race. Once this first race is completed, Aloy will be made aware of the next one, and this trend will keep repeating.

Throughout the race, players can use their blaze to boost their charger's speed and then shoot other racer's steeds to knock them down. Make sure when doing this to aim for the legs of the charger. Aloy will be forced to use a warrior bow, and they can only grab ammo from within the race that hangs down. Otherwise, players can draw up close to other racers and melee attack them.

Just be aware that the other racers will fight back and don't stand still or be in the same position within the route. This should be a fairly simple race outside of knocking down the opponents. There are no big obstacles or landscapes to take note of.

Related: Where to find the Legendary Armor in Horizon Forbidden West

Cliffs of the Cry

On the shore west of Thornmarsh, players can find this second Gauntlet Run. After speaking with Josekk, there is a rumor of a racer named Red Teeth who had previously ridden a Slaughterspine in one of the races but hadn't tested this track in particular. No one knows who he is due to him always wearing a mask of some type. Attah decides to start the race without him, implying that he'll show up somewhere along the way.

As this race track travels along the shoreline, there are several things players will need to look out for. The first is the Tideripper which will beach near the beginning of the race. Keep to the far left here to avoid aggressing it. Further along the track, it'll become a cliffside race.

Past the bridge, the Tideripper will be waiting on the beach, so make sure to boost here. Let the other racers behind her deal with it. Further along this path several Sunwings will scatter and quickly attack. Afterward, in another section of the beach, a stampede of Burrowers will run down the beach and into the water. Slow down and let other racers get thrown by the stampede or strategically shoot their charger right before this area.

At the last leg of the race, slow down a bit as there is a barricade and Clamberjaws up near the top of the next big hill. The rest of the race past this second bridge will be downhill. This is where players need to focus in on getting into the very front of the race.

Northwest of the Bulwark, players can find the third of the Gauntlet Races. While Red Teeth didn't show up for the prior race, Haxx and Attah will claim that with Aloy offering some actual competition he might show up in future races to properly challenge her. In this race, players will be given a Sunwing call, shock arrows, and shock mines.

Through the snow and ice, the early section of the race is fairly simple. Avoid traps left by other racers and keep an eye on racers trying to cut the player off. After the stream, there will be a grouping of Fanghorns to avoid. If other racers reach this group first, it will cause a small explosion. So don't keep at the front early on.

Up on the cliffside, there are environmental traps that players can activate in order to slow those ahead or behind them. Past the environmental traps, there are two Bellowbacks, which can be a bit harder to avoid as they can shoot a lot of elemental globs at the player. On the way back down the mountain, there is a group of Chargers but they will run away quickly enough that they aren't much to worry about. If players are still far from the front of the race, they can shoot the Blaze Canisters on their butts to cause an explosion.

Related: Where to find Cores in Horizon Forbidden West

Just northeast of the Stillsands players can find the last of these Gauntlet Runs. At this final race, Red Teeth, the legendary racer will finally show up. For this race, players will receive the Sunwing Call, Shock Blast ammo, Stun arrows, and Shock mines. Use these to the best of Aloy's advantage.

While being one of the hardest races, it also is a fairly simple track along the sand dunes. That being said, players should wait until they near the end of the race to actually reach first place. Early on, the other racers will be fighting so hard for a middle position that it'll be hard to get past or near them. Between knockdowns, shock overloads, and the mine drops, the biggest part to look out for is the melee strikes due to the tight pathway.