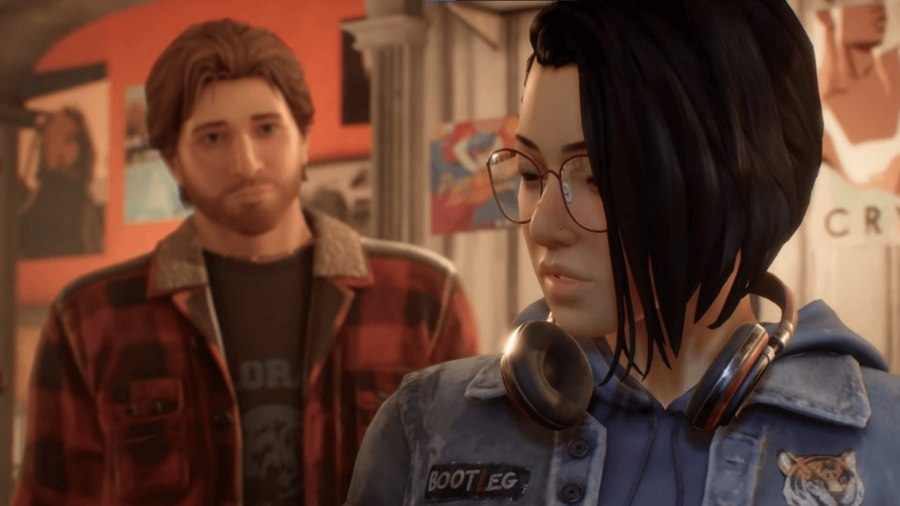 Life is Strange: True Colors has you covered for love interests, and this time around they are both considerably attractive! The choice between a Dungeons and Dragons playing DJ, and a plaid wearing Colorado native is difficult! But today we're going to tell you how to romance the "Rugged Mountain Man" as he calls himself.

Please note: before reading on be aware that there will be some spoilers for the narrative of the game, as some of the encounters are tied to important events in the story. Read on at risk of finding out events about later chapters.

You will encounter Ryan pretty quickly at the start of the game. When Gabe goes to Charlotte's shop to give her some flowers, Alex will venture into the Rocky Mountain Record Traders. Ryan will appear from the back of the shop and inform you that it is closed.

Once you get to talking with him you will see him carrying a bird calls CD. You can either:

You can choose either one as his responses to both are quite positive. Although the nerdy option has better banter about it!

You can then later on choose to either tell him about Gabe, saying that he used to be either:

Similarly, either option here is fine, but once again the dork option has a more flirty quality about it!

When Gabe comes into the store to find you he will ask you what you and Ryan were talking about, at this point you can either:

As with the last options, none of these will get you in trouble, but as always the little jab at the bird calls is a bit more flirtatious!

After the record store you will join Ryan and Gabe when they go to try and find Ethan at the old mine. There is once again nothing in particular here that will get you in the bad books with Ryan at this point. A lot of the conversation between Ryan and Alex at this point is automatic. However, when going to rescue Ethan you can be honest with how you feel about using the belay, and he will believe you.

Related: All Memories in Life is Strange: True Colors Chapter 1

The next big run in with Ryan that does make a difference is in Chapter 2: Lanterns. After confronting Mac you will go to talk with Ryan who you have been avoiding since the wake. He will be beside himself and you will have to get him to forgive himself for the loss of Gabe. At this point you can either say:

All options lead to the same outcome so pick whichever feels right to you.

After that he will reminisce about a memory with Gabe and Alex will reveal her power. At the end of the conversation you can either Shake Ryan's Hand or Hug him. Pick Hug him to plant the seed of romance. Too cheesy? Sorry...

At the start of Chapter 3, Alex, Ryan and Steph will be trying to figure out a way to get information on Typhon from Diane. They will come up with the plan to steal her USB drive whilst one of the group distracts her by flirting with her. You will have to choose between Steph and Ryan. Pick Ryan to watch him ever-so sweetly attempt to flirt with Diane.

Doing this will also basically have you admit that Ryan is hot, which he will feel aware of and hard to uphold when he is cosplaying a Dire Wolf in the next chapter. What a cutie.

After the LARP, things will not go so well with Charlotte. She will become enraged and you will be faced with the option to either take her anger from her, or leave her alone to sort through her feelings herself.

Thankfully, the outburst does not affect the relationship between the three badly, meaning that Alex and Ryan will be just fine even if you choose to take Charlotte's anger. It is a better option to leave her with it, however, for future storyline purposes.

After coming down from the apartment at the beginning of the chapter you will talk to Ryan and Steph. You will either be fine already, or apologies and forgiveness will be exchanged from when Alex lost her temper. After, you will be able to give a rose to one of them signifying your feelings.

Go to the Rose Cart and pick a rose. Ryan will be to the Right of the Stage, walk up to him and select the Give Rose option to lock in how you feel about Ryan. After he will ask you to meet him on the rooftop of the apartment after the mini concert has taken place.

After a talk about gardening metaphors and where Alex sees her future going, you will have the option to Hug or Kiss Ryan. Pick Kiss and it will be revealed that he really wants to kiss you too, and then you'll y'know, smooch and whatnot!

In Chapter 5 a lot happens. Near the very end you will end up back at the Black Lantern to confront Jed about what he has done. If you have chosen all the right options beforehand, Ryan will stick by you and believe you in your accusations towards his father. If you choose the friendship route, however, he will believe his Dad and disbelieve Alex.

And with that you will have romanced one Ryan Lucan! What a nice Park Ranger boy! Is Steph more your choice rather than Ryan? Then check out how to romance Steph in Life is Strange: True Colors!

What is the Soundtrack for Life is Strange: True Colors?

Where are the songs on the Black Lantern Jukebox from in Life is Strange: True Colors?

What is the Soundtrack for the Life is Strange: Wavelengths DLC?

How long does the Life is Strange: True Colors, Wavelengths DLC last?

Is Mikey from Life is Strange: Before the Storm in the new Wavelengths DLC?