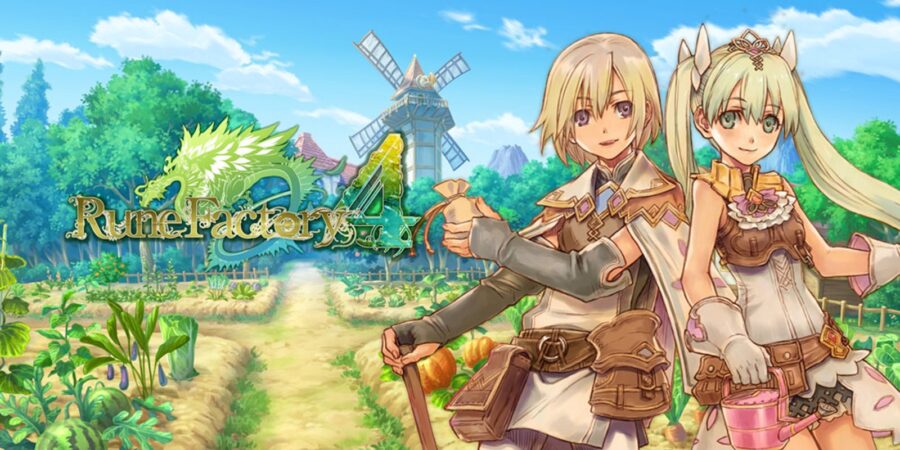 Rune Factory 4 was originally a 3DS game; luckily, the fantasy-farming game was released worldwide on the Nintendo Switch but called Rune Factory 4 Special. The fantasy-farming genre is incredibly popular, no matter what age group, as there is something about chilling, doing chores, making friends, and just going off on adventures, whether it's venturing inside a cave or entering a spooky forest filled with enemies! Some games strongly feature certain aspects over others, whether it's combat, crafting, or farming when others attempt to focus on everything!

Hit indie game Stardew Valley is by far one of the best fantasy-farming games to date. Create the farm of your dreams, live off the land, and become part of a closely-knit community, and hey even get married to one of the lovely townsfolk and start a family! Even the passing of time as it changes between the four seasons, and see what changes. Though combat is in this title, it's not a heavily emphasized aspect of it, as it is in Rune Factory 4. With a regular flow of updates, included co-op play, both online and local, Stardew Valley is one of those must-play games that you can turn on every year and sit back and enjoy.

My Time at Portia

My Time at Portia is a jack of all trades, and personally, it's one that does it extremely well. The aspect of the game is not only on your farm but on the crafting mechanic. You can complete and fulfill quests from the town and from a bounty board, and by creating what they need, you can build relationships with people and earn that much needed Gold to fund back into your home and farm. The materials you need a located all around Portia, from monsters to hitting trees, mining ore, even from venturing into mini-dungeons to get a bundle of parts. If you had to play any game, I would recommend My Time at Portia in a heartbeat.

This might be a strange addition to the list, especially when the main focus of this game is the combat against the massive monsters. However, a vital mechanic of this game is the materials, crafting, and farming, as without them, you won't be able to easily progress through the game. You can go to find these monsters in different areas, and you need to collect materials on the way, but you have limited inventory space. You can then plant certain things that grow after a certain amount of cycles; you can craft items from these materials into health items, stamina items, etc. All of these are essential for your survival. However, Monster Hunter is not for the faint of heart, as it's notoriously difficult!

This is an extremely niche series, as there is no combat and not a massive emphasis on farming; however, it makes up for all that by forming a strong bond with your animal townsfolk. Animal Crossing is a game you play for an hour a day, picking weeds, fishing, checking your crops, seeing what the shop has to offer, plus tons more. Though in Animal Crossing: New Horizons, your island is your oyster, so there's much more to do on it, with more events, and tons of items to deck out of your island with and all sorts!

You can even create your own games in Animal Crossing as someone did with Among Us!

Harvest Moon is very much a farming game, as, like most games of this genre, you start with nothing and have to build it into something grand. By sowing the fields and planting the seeds, to looking after your animals. Make friends with the townsfolk, and sometimes random events will occur to get to know them even better. If you so wish, you can even get married and have a family. Harvest Moon is the game to inspire all other games of its genre; without it, I don't think farming sims would be the same today.

Medival Dynasty is very much a graphically enhanced version of a farming-village building game. You have to create a small medieval based village, do everything yourself, cut down trees, and farming, but every four days, the seasons change, and things become much more difficult; there is an awful lot to manage to begin with. You have to build up relationships with nearby village folk and convince them to move to your quaint little village and help you with everyday chores. The game is in early access, but from their roadmap, the game definitely has the potential to become something truly great, with bandit attacks and the like.

The Atelier series is more about crafting and alchemy than it is about farming, as there is no farming to speak of, but there is a turn-based combat system, which is really good. The game is about gathering materials for use in alchemy and experimenting to create more potent potions or more powerful equipment. There's no character creation or dating, but it does have a very light-hearted story while you get to know the characters and townsfolk through events. The series is entertaining to play and worth checking out if you like just a fun character-driven romp without the need to save the world.

Moonlighter is along the same lines as Rune Factory 4, but instead of farming, you have to find materials to sell in your shop. You gain the materials by entering into monster-infested Dungeons and collecting resources from the enemies that you kill or from chests. If you progress far enough into the Dungeon, you can fight a boss, and unlock other ways to progress, and eventually unlock more Dungeons to dive into. When your inventory is full, you come back and attempt to sell them to the village folk. When people interact with it, a speech bubble appears over their heads, depicting how they feel about the item's price. You then alter the price of said item based on what emotion you see. It's an incredibly fun game, where you invest your profits back into the shop to make it better! It might not be the same premise as Rune Factory, but it's an experience worth playing.

Dragon Quest Builders is very much Minecraft with a Dragon Quest skin, but its world-building and story leave Minecraft sitting in the dust. Though you do not farm, the emphasis is on building and crafting and fighting the slimes and monsters that have ravaged the land. Though this title is very much different from a farm simulator, as Rune Factory focuses on the combat aspect just as much as the farming mechanic, I believe that people who like the crafting aspect will like Dragon Quest Builders.