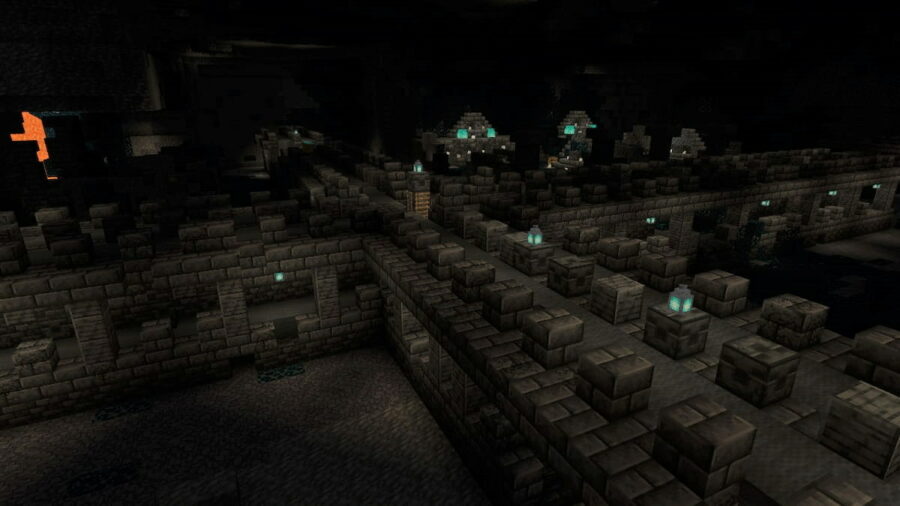 Minecraft’s Wild Update has finally introduced the Ancient City to the game. This underground structure generates randomly below the -0 level, and contains all kinds of secrets, including items, Skulk, and the terrifying Warden mob. These are the best new seeds to find the Minecraft Ancient City in Java and Bedrock edition.

Cave to the City

A huge cave at the base of a mountain tunnels deep into the depths of the earth, passing through dripstone and lush caves on the way to a dank and Ancient City below the surface. Surrounding the area is one of the more impressive looking mountain ranges we’ve encountered in-game. And there’s a lot of interesting elements nearby your spawn.

A frozen icefield protects the entrance to this Ancient City. As you dig down, you’ll struggle through a Mineshaft which rewards you with valuable spoils in the minecart chests. Around this barren landscape, there are hidden points of interest, but the true treasure definitely resides deep below the surface of this world.

A lone flat-topped mountain pokes out the center of a vast jungle, bordered by badlands. Tunnels and caves lead downward, but where do they lead? The Ancient City, of course. Gving you great access to starting resources, and a nicely secluded area, you’re able to create your distant outpost here in the midst of a jungle clearing, before tunneling down into an Ancient City.

This is actually the default seed you’ll get if you specify an Ancient City biome when you create your world in Bedrock edition. With a spawn in a huge Mesa/Badlands biome, bordered by jungles and forests, this is an unorthodox starting point with an interesting secret: An Ancient City just 120 blocks from X: 0, Z: 0. On your way down to discover the Ancient City, you’ll encounter lush caves, and plenty of resources. And the vast open darkness of the Deep Dark, of course. A perfect start for any Ancient City seekers.

Dripstone City is an ancient city intersected with a dripstone cave that gives an even more menacing feeling to the already terrifying locale. Surrounded and covered by huge snow-covered series of biomes, a snow-covered forest, then plains, and finally mountains. The Ancient City sits below the peaks of one of the vast mountain ranges.

Spawning next to a vast ocean with limitless potential on the horizon, you’re blessed with three very close Ruined Portals and quick access to the Ancient City. Villages and other features dot the surroundings and give you quick access to multiple types of wood, stone, and materials. This is a great “classic“ Minecraft seed, starting you in a basic biome, and surrounding you with gradually more unusual areas.

Villages, Pillager Towers, and Temples sitting within a stone's throw mean instant conflict in this vast desert. Spawning within view of one Tower, you should beware because another looms in the distance. This is one of the most populated deserts you’ll ever find! But below all this is one of the largest and most sprawling Ancient Cities we’ve encountered. A huge cavern which causes Skulk to rise up almost 40 blocks buried below a mountain range. And just to make things even more hazardous, several parts of this Ancient City are in Slime Chunks!