In League of Legends, the Jungler is tasked with roaming between lanes, securing neutral objectives and assisting their Top, Mid, and Bottom lanes. Because you are constantly pathing around the rift, playing as a Jungler allows for you to have the highest overall map presence in the game, a huge opportunity for anyone looking to carry games or climb the ranked ladder! In this How To Jungle guide, we will cover the most important aspects of jungling, so that you have a proper foundation of the role that can be adapted to bring victory after victory in Season 2020.

During the loading screen, and the first 1.5 minutes until your blue or red buff spawn, be sure to analyze your lane match-ups. This can help you determine a game plan to start the game. League of Legends is truly a game of seconds, and by having this plan ready ahead of time, you will minimize time wasted deciding what to do next.

Example: If you see a Lux (ally) vs Talon (enemy) mid lane match-up, and you are aware that Talon likes to all-in at level 2 to get a kill, you can adjust your path so that you are nearby to counter his engagement, potentially saving your teammate and/or scoring an early kill.

If the teams are reversed, and the Talon is on your team, you may want to be nearby to secure the level 2 kill.

Similar opportunities can be recognized (ex: top laners with ignite) as your general game-knowledge increases, which comes with practice. If you are checking the overall match-up state of each lane in the pre-game consistently, you will learn and improve in the jungle much more quickly.

Your "first clear" encompasses your entire jungle path until your first trip back to base, whether that be by recall, or by death. Hey, sometimes dying in League of Legends is a necessary evil, just don't make it too much of a habit.

In Season 2020, Riot has made some changes to the experience Junglers receive from farming camps. If you played in Season 9, you may be familiar with the term "catch-up" experience, which allowed Junglers to essentially perma-gank lanes, without sacrificing much XP since camps would award more XP if you were behind in levels. 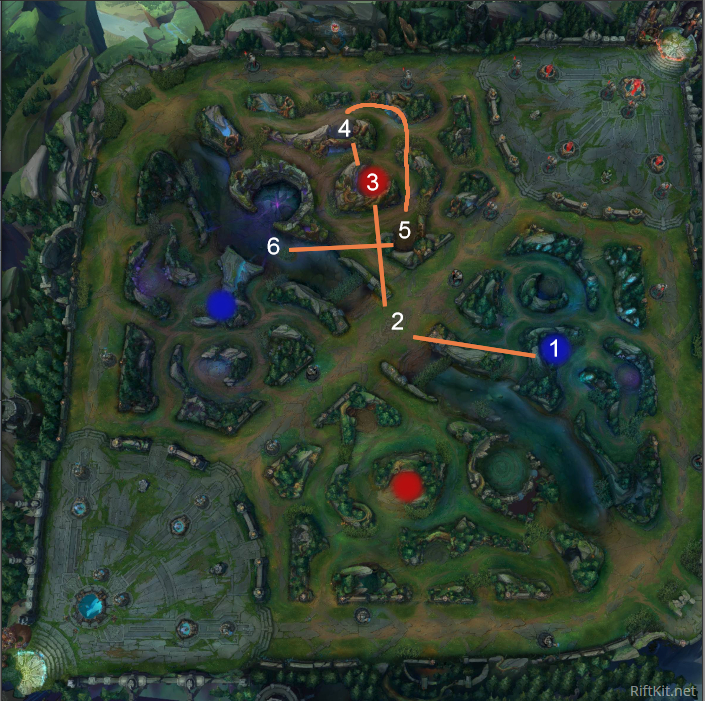 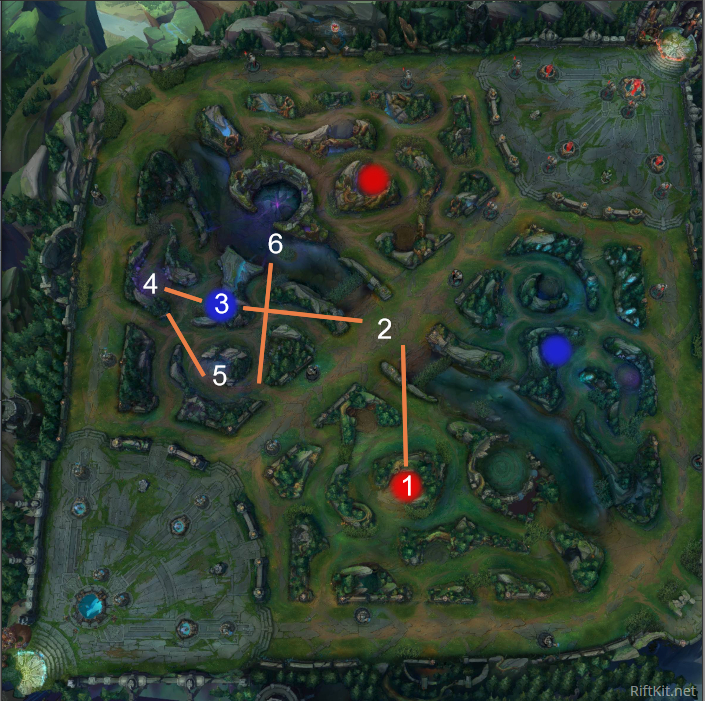 In a situation like our earlier Lux vs Talon example, an early Level 2 gank would be very effective, however there are some jungle champions that naturally excel at level 2 ganks. Prime examples would be Xin Zhao, Twitch, and Jarvan IV. Oftentimes you will want to direct your level 2 gank at the middle lane, as this is on the way to the next map quadrant for you to continue clearing your camps after the gank.

If you are looking to gank at level 2, you will kill your first Red/Blue buff, and then go to gank. Don't over-force this gank to get a kill, dying here would leave you very vulnerable to having your camps stolen by the enemy jungler while you respawn. Burning a summoner spell, or even just chunking the HP of the enemy laner is enough to get your teammate an early lead. After the gank, continue to clear the entire quadrant that your second buff lies in. This will leave you with just enough time to contest the Scuttle Crab when it spawns. 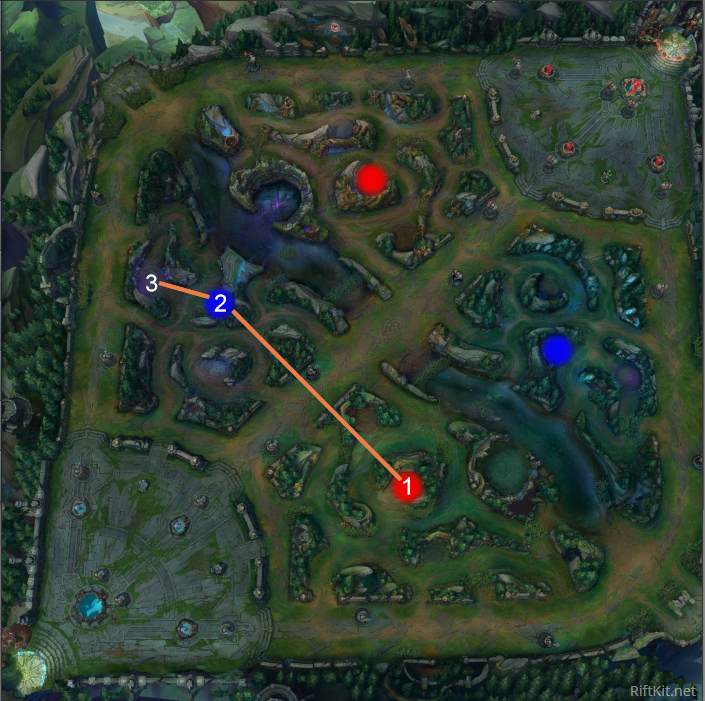 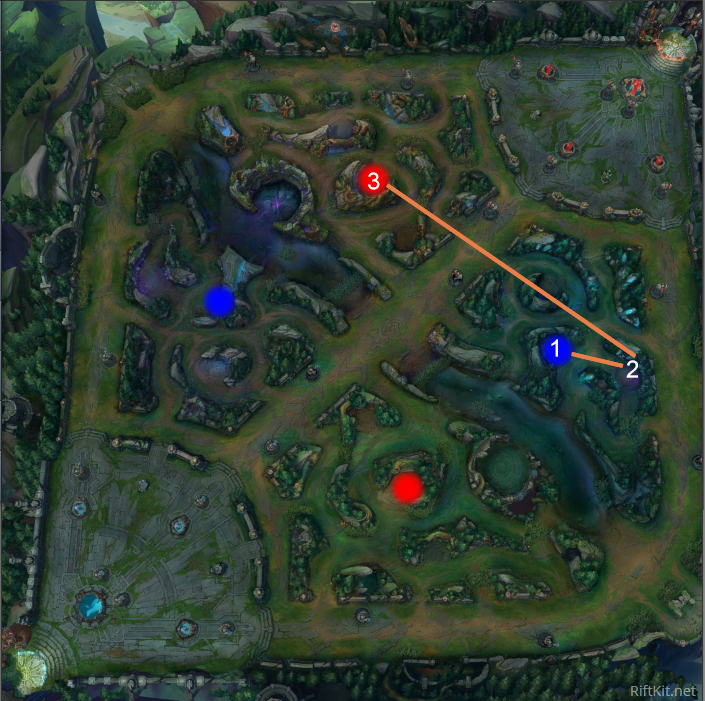 Following these paths will allow you to get the fastest level 3 gank. If you are playing a champion that is less effective with just 2 abilities, or relies on 3 abilities to successfully gank (Qiyana, Graves, Sejuani), this is the path for you. This gank is typically aimed at the sidelanes, and by following this path you can gank at level 3 while the top or bottom laners are still level 2. This drastically increases your chances of a successful gank.

Always be on the lookout for a counter-gank. Counter-ganks can be especially effective, as the enemy may inefficiently use abilities thinking they are in a 2v1 situation, unaware that you are about to level the playing field and turn it into a 2v2. Don't be afraid to drop the camp you are doing if it looks like things could go bad fast, you can always come finish clearing after the counter-gank. The payoffs can be huge, not only are you preventing the enemy jungler's gank, but you might turn the fight and land a kill or two of your own.

In League of Legends you usually are playing with imperfect information. Be sure to drop wards and clear enemy vision as you path through the rift, so that you can track enemy movements, specifically those of the enemy jungler. This will create more opportunities for you and your team, by having more information than the enemy.

A Note on Adapting

Jungle is the most flexible role in the game, as you can use a different path each and every game. The other 4 roles go to the same lane every game, but you can tailor your pressure-strategy to what would be most effective from one game to the next. As you practice jungling, and become more familiar with these basic Season 2020 routes, be sure to adapt where necessary. Maybe try starting on the topside of your jungle, and just reversing the route of the level 3 ganks shown above from 1-2-3 to 2-3-1 or 3-1-2, if you want to be close to your bottom lane to support them early on in the game.

Using the Level 2, Level 3, and Counter ganking strategies in this guide will allow you to be a reliable jungler, game after game. While the routes illustrated above are a solid foundation for jungling, adaptations are what separate the good from the great, so be sure to look for opportunities to adjust your path toward! Best of luck in the Jungle for Season 2020.