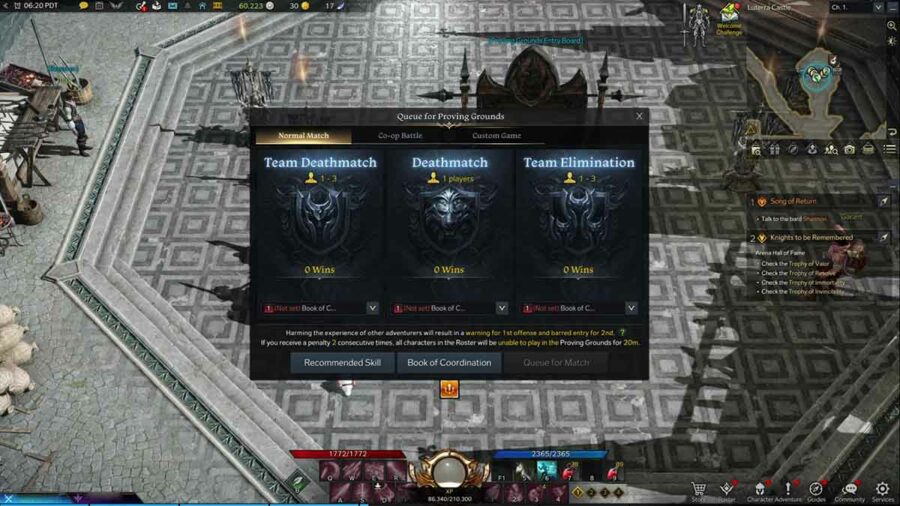 Proving Grounds in Lost Ark is an arena where players can test their skills against others in Player vs Player (PvP) matches. Players can play three different modes: Team Deathmatch, Deathmatch, and Team Elimination. This is unlocked after completing the Final Battle mission and entering East Luterra.

Co-op Battles are also available, but those are limited to certain events. Players can participate in Co-op Battles in groups of up to six at once and are not allowed to ruin the experience for other players.

After speaking to Arena Manager Lorence at Luterra Castle to access the Proving Grounds, players only need to click on the [Proving Grounds Entry Board]. That will show the types of matches there are and allow players to join.

Related: What does it mean when a piece of equipment is bound to you in Lost Ark?

Proving grounds offer three different kinds of PvP matches. Winning these matches depends on the number of kills each team gets. With the exception of Team Elimination Matches, players can rejoin the battle even if they have been knocked out.

The three matches and their rules are:

For more Lost Ark guides, check out Lost Ark – How to change the AFK timer or What is Crystalline Aura in Lost Ark? right here on Pro Game Guides.

What are the Proving Grounds in Lost Ark?