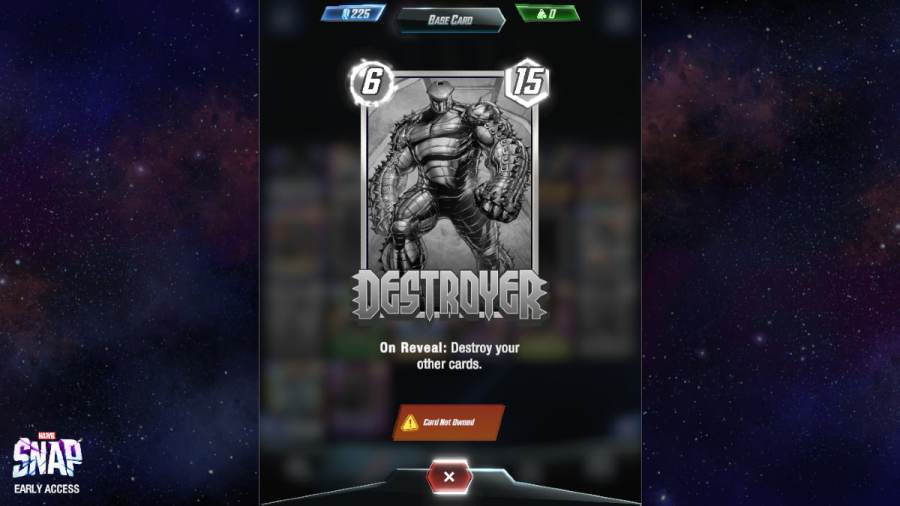 When it comes to the current top decks of the meta, many players point straight to Marvel Snap's Zabu decks, Silver Surfer, and Leech Leader decks. However, one of the consistently best decks in the game has been the Destroyer Ongoing deck. Meta after Meta has seen this deck continue to perform at a high level, and on top of that it is quite budget friendly. Thus, many players wonder what cards make up this deck as well as how to pilot it.

The top Destroyer deck list and how to play it

As stated previously, the top win rate Destroyer deck is also very budget friendly, only requiring one Series 3 card in its namesake, Destroyer. The deck list and code can be found below:

One of the big reasons this deck is consistently in the high tiers is because it is quite straightforward when it comes to piloting. Your early turns will focus on playing out your small Ongoing cards into neutral or favorable locations and curving into your mid and late-game bombs.

Typically, you'll be wanting to play for two locations unless the situation calls for spreading your cards out across three. Cards like Warpath, Captain America, and Ant-Man will excel together at taking a single location with ease while your Destroyer can be used alongside Cosmo or Colossus to take another.

Armor, Cosmo, and Professor X are all great cards on their own, but in this deck they are incredibly multi-functional. Armor can be used to access locations like Death's Domain or Murderworld, Cosmo can bring your opponent's strategies to a grinding halt by shutting down On Reveal effects, and Professor X can lock out a location completely, making it so no cards can enter or leave. However, these three cards also serve the distinct purpose of making Destroyer much easier to play, as each of them can stop Destroyer from destroying your cards.

Lastly, Klaw, Spectrum, and Mister Fantastic serve similar purposes by getting extra Power to other locations. Spectrum can swing the game in your favor by buffing all of your Ongoing cards, Klaw can swing multiple locations in your favor by spreading 10 Power between them with his effect, and Mister Fantastic spreads his Power between potentially all three locations. This is great in general, but in this deck where you're looking to leverage Professor X and Destroyer, these effects can be devastating, as they can catch opponents off guard when you deploy Power into locations that shouldn't be getting any.