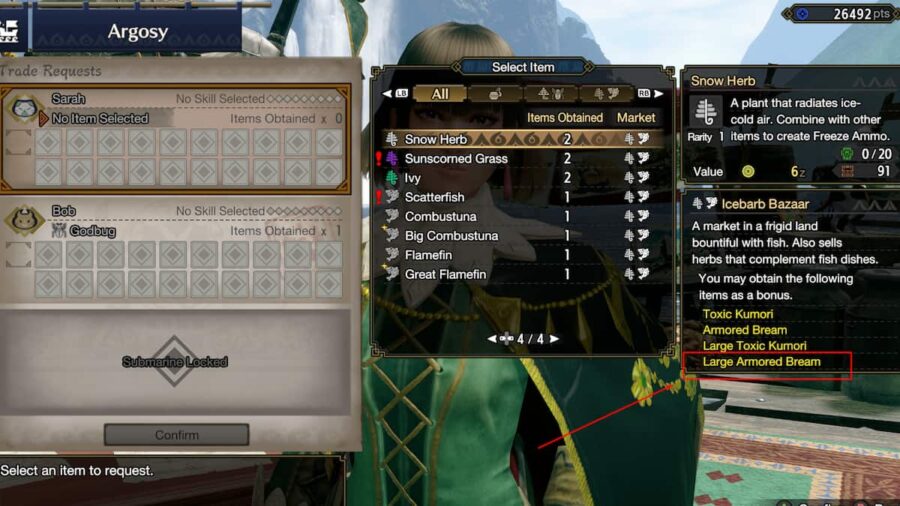 Where to find Large Armored Bream in Sunbreak

To get the Large Armored Bream in Sunbreak, you need to have access to the Argosy, which you should have since access to Sunbreak is late-game, and be Master Rank 2. The Large Armored Bream is a bonus item awarded upon using the Argosy to acquire specific materials. However, getting a bonus item, especially the one you want, comes down to luck. It may take a couple of quests or numerous quests to acquire one.

You cannot get this material any other way, including finding it on any map to killing any monster. It's only acquired from The Argosy.

Head to the Argosy menu in one of three ways to potentially get your hands on a Large Armored Bream:

Once on the Argosy menu, press Order Items, Trade Requests, then select your highest level Palico/Palimute. When you can select an item, head to page four with the following items on it:

Pick any from that list above, but only from that list. Do this for all the Submarines you currently have for a higher chance of at least one of them getting a Large Armored Bream as a bonus item.

Now, for an increased chance of getting any bonus items or the Large Armored Bream, head to Buddy Bargaining, select your Palico/Palimute, and use any of the Bargaining Skills available, depending on their level. The more expensive, the better. We recommend the EZ-PZ Bargain skill. Do this for all of the Submarines you have used in your attempt to get a Large Armored Bream. Once all is done, click Confirm, then play Sunbreak some more.

Either do some hunts to increase your Master Rank or go on easy quests on any rank. Trade happens on the Argosy after each quest is completed, so the faster you can do a single quest, the quicker items will appear in your Argosy box. Rinse and repeat until your box is full or you have a Large Armored Bream. Don't go on Expeditions, as they only count as a hunt after 10 to 12 minutes have passed.

The best way to farm Large Armored Bream is to go on the easiest quest that takes the least amount of time. We recommend the Village One Star Fungal Frustrations quest. Using Buddy Recon, you can complete it in just over one minute, depending on luck. Even without luck, it'll take you two minutes tops to complete.

What is Large Armored Bream used for in Subreak?

Large Armored Bream used for armor crafting in Sunbreak. It is an essential item in creating the Vaik X armor set, but you need seven in total. This armor isn't the best in terms of Skills for anyone apart from a Gunner, but it has several high Decoration slots, allowing you to add in the Decorations you want.

How to get Large Armored Bream in Monster Hunter Rise Sunbreak