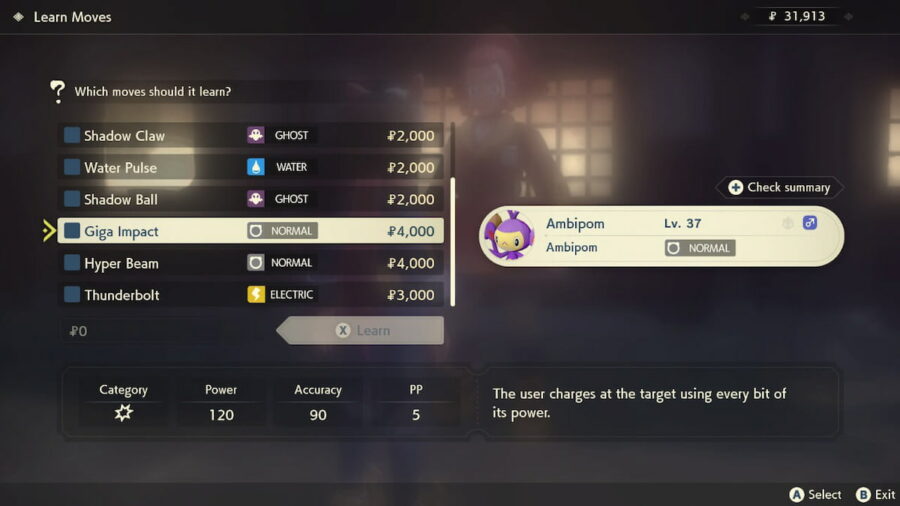 What Ambipom lacks in its defensive stats, it more than makes up for in its Attack and Speed. It has low Special Attack but has access to many Special moves that can be used if the player wishes to. Being a Normal Type, Ambipom's S.T.A.B. (Same Type Attack Boost) is resisted by Rock and Steel and has no effect on Ghost Types. Despite this, Ambipom has access to many moves that will hit anything its Normal moves won't. These are the best moves for Ambipom in Pokémon Legends: Arceus.

All of Ambipom's best moves can be learned and mastered at Zisu.

How to use Ambipom best in battle

Giga Impact is Ambipom's best move to use against any Pokémon not resistant to Normal Types. It has more Base Power than Double Edge and Ambipom doesn't take the recoil from using it. Giga Impact's Accuracy is also increased when using the Strong Style version of it, making sure it never misses.

Fire Punch is mainly used for Steel Type coverage as Giga Impact has more Power against Grass and Bug moves. This is because Giga Impact's 120 Base Power is increased to 180 and Fire Punch's 75 Base Power only goes up to 150 on a super effective hit.

Ambipom's Speed will ensure it moves and often multiple times. As a Normal Type, it is only weak to Fighting Type moves while being able to respond with a very powerful Giga Impact. While it can't take many hits, it is more than capable of dishing out a large amount of damage for quick two-hit knockouts.